A WOMAN has spent an entire holiday taking pictures of ‘views’ that just happen to be behind her tanned legs.

Nikki Hollis has posted more than 50 pictures of her legs lying on beaches and next to swimming pools.

Hollis said: “I just wanted to capture all the beautiful scenery I saw on my holiday.

“The turquoise oceans, the white sands, the inviting pool.

“But who cares about that shit, look at my legs! My lovely, tanned shiny legs, see how they shimmer in the sunlight in front of the big water and notice how the blue sky compliments my nail polish.

“My legs are living their best life.  #blessedlegs.” 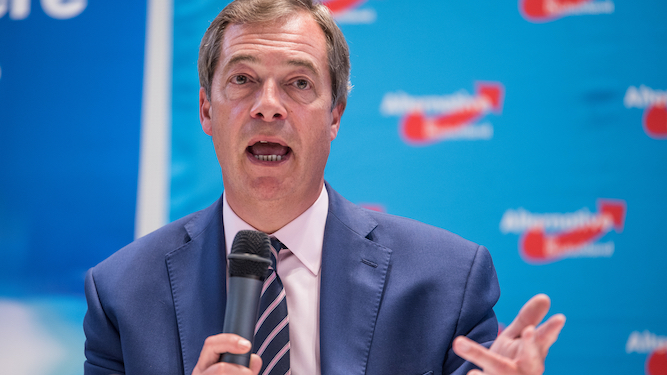 NIGEL Farage recently treated an audience in Sydney to his gags about the royals. Here the Brexit Party leader explains how to have a successful stand-up career on the side.

Learn to craft brilliant jokes
The best jokes reveal a truth about the world, but in a witty and surprising way. Try things like: “Meghan – what a bleeding cow!”, or “I hope Prince Charles dies soon, the git.” It’s funny – but with a point.

Practise your comic timing
Once you’ve said your feedline, for example, “Why did the chicken cross the road?”, let the anticipation build for a moment or two. You’ll get a much bigger laugh when you unleash your killer punchline: “To take charge of its own destiny free from protectionist EU trade policy.”

Know your audience
It’s easy for Stewart Lee to pander to his politically correct, university-educated audience, but could he write gags for jingoistic racists? No. And that is why he’ll never write classic one-liners like: “My girlfriend asked if I wanted to try something different in bed. I was like ‘Yeah!’, but she just said: ‘F*ck off home then while I shag this Polish guy.’”

Don’t lose it with hecklers
Effing and blinding at hecklers turns the audience against you, so keep your put-downs FUNNY. Personally I don’t have a problem with hecklers at my gigs, although that may be due to the audience resembling a mob getting warmed up for Kristallnacht.

Keep it fresh
There’s nothing more tragic than tired jokes about Pokemon or women taking ages to get ready. That’s why I’m constantly updating my act with fresh material like: “The Queen Mum – she liked her gin, eh? Have you ever noticed how old people smell of wee?”

Remember the real money’s in TV
Live performance is great, but if you want to break into the big time you’ve got to be on TV. Luckily I’ve just been been commissioned to do another series of my own show, BBC Question Time.