THE Guardian website has a larger readership of argumentative right-wing arseholes than middle-class bedwetters, it has emerged.

The newspaper’s site now has an audience that is 81 per cent tedious right-wingers who flock there to sneer at ‘the left’ and make unfunny comments about hairy women.

Deputy editor Stephen Malley said: “I think they come here because they’re guaranteed an argument and the Telegraph has closed its comments section as nobody could moderate it without becoming suicidal.

“As a result even an earnest article about youth unemployment will get thousands of hits and rabid comments like ‘Welcome to Benefits Britain!!! National Service or compulsory sterilisation!!! No if’s no but’s. Simples.’”

Troll Roy Hobbs said: “I hate the Guardian and everything it stands for, so I have to spend hours there reading up on obscure human rights issues so I can rant incoherently about them.

“I think they might have realised there are loads of people like me because they’ve started selling ‘golf and wine’ mini-breaks and ‘Enoch was right’ mugs.”

McDonald’s in weird position of being the ‘ethical burger’ 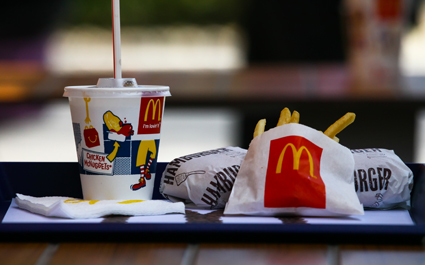 MCDONALD’S has become an ethical burger chain by a process of elimination.

Following protests against rival Byron Hamburgers’ role in an immigration sting, McDonald’s has somehow ended up being a fast food destination for left wing consumers concerned about workers’ rights.

A spokesman said: “We noticed something weird going on when we sold nine salads yesterday across the UK. Normally we sell one of those things every three years.

“There are customers in here reading Socialist Worker and listening to free jazz, I’d describe them as ‘beatniks’. Apparently they’re impressed by our management trainee programme and our policy of letting workers have unlimited fries.

“It’s lucky they don’t know how many people die pouring the lava into our apple pies.”

Tom Booker is a trainee ‘burgerlizer machine’ operator at McDonald’s: “It’s like a big metal drum. Cows walk in, burgers come out.

“My job is to press the red button. I’d never really thought about the ethical side too much but I suppose it’s better than a call centre.”