Sun editor Tony Gallagher has hit out at politicians for their ‘half-hearted’ backing of the tabloids when judges make decisions that threaten their interests.

He added: “Our constitutional role is to choose the prime minister, decide when Britain goes to war and withdraw the country from the European Union.

“But still these unelected elitists, on six figure salaries plus expenses, try to block policies overwhelmingly backed by not just ourselves but the Daily Mail and Her Majesty’s Daily Express.

“And don’t forget, as editor of the Sun I am also the Lord High Chamberlain of the Mob.”

Gallagher added: “Rupert Murdoch? No, don’t think I’ve heard the name. He owns this newspaper? I honestly did not know that.”

‘Who is Richard Nixon?’ asks Trump 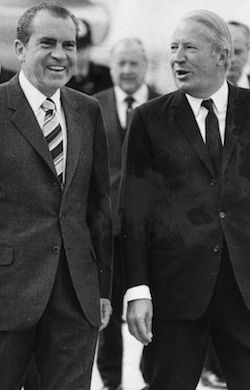 DONALD Trump has been asking his aides who Richard Nixon is and why he is famous.

The US president called his close advisers into the Oval Office shortly after his predecessor was mentioned briefly on a television programme.

A senior source revealed: “The president looked puzzled and said, ‘Why would they mention this guy? Is he still alive? Can I talk to him? I bet he was told beforehand that the Oval Office is actually an oval. Not fair!’.

“The advisers hummed and hawed and then said Nixon was just some guy who was president for a couple of years who then decided to resign because he had done everything he wanted to do and went to live in a big building called the ‘Watergate’.

“Trump then said, ‘Okay, but is he still alive?’. At that point Steve Bannon asked the president to leave the room so he and the others could talk about this in private.”

The source added: “The President did confirm he was ‘well aware’ of ‘Deep Throat’ and has seen it 19 times.”