Snog Marry Avoid? and Tittybangbang: how BBC3 was the greatest channel ever

BBC3 is back on TV after years as a sort of online thing. The channel’s millions of fans pay tribute to its legendary high-quality programming:

“What TV needed in the 2000s was more annoying exhibitionists and fake tan morons, and Snog Marry Avoid? delivered them by the truckload. I watched every episode until my doctor warned my brain was shutting down. It was presented by one of Atomic Kitten but nobody knows which one.”

“I’d always found Two Pints of Lager and a Packet of Crisps too cerebral and highbrow so Coming of Age was perfect, with its mind-deadening treadmill of puerile gags about excrement, ejaculation and the name ‘Fanny’. I’m laughing now.”

“Probably the most powerful documentary of the 21st century was I Believe in UFOs: Danny Dyer. A proper bloke skimming through some old UFO ‘evidence’ and meeting the usual cranks. His hard-hitting conclusion? Aliens probably haven’t visited us. Superb factual programming from BBC3.”

“American Dad was great. I’d been waiting all my life for a lame rehash of Family Guy by the same people, and this fulfilled all my expectations. Which were: the wife’s gone to bed but I need something to watch while I have another can.”

“I loved Sun, Sex and Suspicious Parents, where young people trying to get laid on holiday were spied on by their mum and dad in a f**ked-up Freudian nightmare. It was hilarious and in no way exploitative shit with the hook of teenagers knobbing.”

“Like all Stacey Dooley’s documentaries, Blood, Sweat and T-shirts really opened my eyes. Never in a million years would I have guessed the Asian clothing industry exploited workers. It certainly seemed news to celebrated documentarian Stacey.”

Britain about to discover Johnson isn't a good wartime leader either 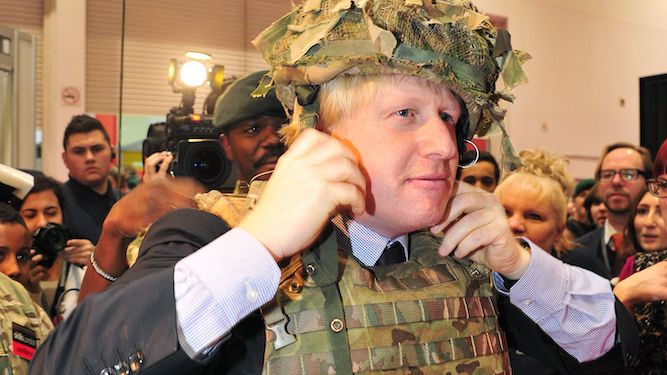 THE UK is about to learn that Boris Johnson handles full-scale war as badly as he does Brexit, pandemics and the economy.

With Britain teetering ever closer to war with Russia, the country is soon to discover that the prime minister’s only resemblance to Winston Churchill is an inordinately popular public image slowly diminishing over time.

A Ministry of Defence spokesman said: “I was in a war meeting. We’re f**ked. If you want to tick something off your bucket list, do it now.

“He’s planning to celebrate the start of the conflict as a boon for the economy while wearing a tin helmet while Dominic Raab leads an inquiry into whether Putin is Russian.

“As for three-word slogans, expect to hear ‘Duck and Cover’, ‘Shoot the Bastards’ and ‘Nuke Their Nukes’ a lot. Expect them, as usual, to have no effect.

“Military experts will be sidelined in favour of Johnson’s own tactics: spouting soundbites to keep the tabloids happy, doing nothing about them and hosting parties from his Lulu Lytle-decorated nuclear bunker. As tens of thousands die. Like usual.”

But Roy Hobbs of Sheffield countered: “So what? Can you imagine how much worse it would be if Starmer was in charge?”