The NME remembered, by various wankers

YESTERDAY the New Musical Express announced it was scrapping its print edition after 66 years. We asked various bellends to share their memories of the legendary publication.

For a teenager growing up in the suffocating boredom of suburbia the NME offered an escape into a more exciting world, which is an incredibly fascinating insight no one has ever had about music before. I am great.

I worked on the NME during the punk years, and literally anything could happen. One day Julie Burchill might call The Eagles a ‘bunch of wankers’, the next Sid Vicious might pop in and knock things off Tony Parsons’ desk, which he hated. There was simply not a wilder or more exciting place at any time in history.

You couldn’t wait for that week’s NME to come out so you could rush to the record shop and pick up the latest cutting-edge tracks they recommended. As a result I’ve got loads of shitty records by Birdland, These Animal Men, Klaxons and Spacemen 3. If they’re going bankrupt can I get listed as a creditor? I spent thousands.

Without the NME’s support, which coincidentally came at a time when there were no good bands about, we wouldn’t have had a career. I wouldn’t have shagged loads of hot girls while on a tour of student unions. My current life as a level 2 admin might not be quite so unbearable.

I disdain and abhor the NME. They betrayed me, and betrayed their readers, in the 00s when they chose to hype those raucous roaring boys The Strokes instead of the real roots movement galvanising the youth of the day, which was UKIP.

I loved the NME, and only engineered austerity to create a harsh national environment from which dozens of marvellous new indie bands could spring. It didn’t work, like everything else, but my motives were pure so my conscience is completely clear.

Frankly there was no need whatsoever for anyone to read idiots blithering on about bands in inky newspapers once the technology came along to hear them for themselves. And Smash Hits was far better and wrote about better bands anyway. What? 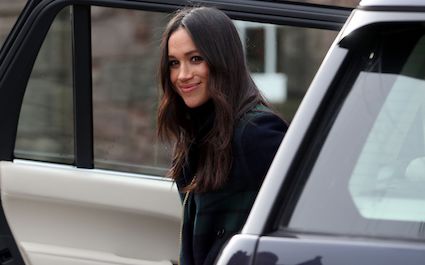 THE blood of more than 400,000 lizards has cascaded over Meghan Markle on the altar of an underground church to make her Royal forever.

The Archbishop of Canturbury, dressed in his Inverted Vestments and wielding an obsidian crucible, welcomed Markle to the true dark religion that runs England in a cavern deep below St Pauls.

Prince Charles, soon to be Markle’s father-in-law, said: “Her old eyes are in a jar. She is one of us now.

“The colour of her skin was always irrelevant. It will not be worn for long. Her first shedding will come after the ceremony. It will be beautiful.

“Her acting experience will be… useful. From now on her whole life will be a pretence of humanity, and mortality, and that this Earth is not being terraformed to make a more comfortable home for our kind.”

Onlooker Mary Fisher, who had sneaked into the ceremony waving a Union Jack, said: “It was just wonderful. She screamed as her soul left her and the ageless, black thing entered.

“And then I was chosen to be the host for her thousands of eggs. I couldn’t be more proud.”