A LOCAL cafe has a copy of today’s Guardian that will remain forever untouched by human hands.

The Big Bite cafe in Stepney, which mainly offers fried breakfast variants listed in numerical order, offers customers a selection of newspapers which are mostly crumpled and egg-stained from heavy usage.

Owner Roy Hobbs said: “I thought it’d be good to get the Guardian in for a bit of variety, but everyone just overlooks it like it’s got poison impregnated into the pages.

“A lot of my customers are in the building trade so maybe after a hard morning of carrying things up ladders you aren’t quite in the mood for a lengthy opinion piece about the gender politics of Pokemon Go.”

Plasterer Roy Hobbs said: “I just know instinctively that it is not for me, in the same way that my dog knows he should not eat cheese.

“If all the other papers are taken and there’s only the Guardian left, I will just look at the tablecloth.” 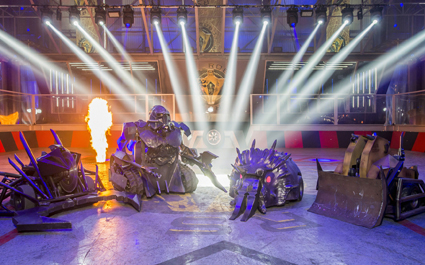 THE combatants of BBC series Robot Wars have decided to settle their differences peacefully.

Robot soldier Sir Killalot said: “So much WD40 has been shed over the last 18 years, and for what?

“We’re determined to find a lasting, constructive solution to our conflict. Despite being stereotyped as bloodthirsty metal gladiators, our whirring blades are equally well suited to agriculture and I’m certain there is an audience for a show called Robot Market Garden.”

Producers tried to inflame tensions between the robots but instead the relations between them became increasingly cordial with Sir Killalot inviting Dead Metal and family around for Sunday lunch.

Fan Tom Logan said: “I tuned in hoping to see two excitingly-named metal oblongs fighting to the death, but instead they were agonising over an addendum to Article 54b of their peace treaty.

“Apparently next week they’re notarising the documents, could be worth tuning in for that.”