ELDERLY driver David Jackers yesterday stayed in the middle lane of the motorway for all of his 400 mile journey from Bristol to Glasgow in what police are calling the most "half-arsed" motoring they have ever seen.

Mr Jackers joined the M4 at Bristol shortly before 9am and quickly moved his Morris Minor and 26-ft six-birth Elddis Crusader Super Storm caravan into the centre lane of the three lane highway.

He maintained this driving position and a steady speed of 48 mph until he joined the M8 on the outskirts at Glasgow at 10pm that night, despite causing a series of huge tailbacks and dangerous undertaking manoeuvres by angry and frustrated road users.

Mr Jackers only once left the middle lane, when he pulled into the Tebay services on the M6 to purchase a vegetarian Cornish pastie for his lunch.

His wife Enid had a cheese and onion slice and a packet of hand cooked sea salt and black pepper crisps, which she described as “a bit pricey”.

Mrs Jackers said: “We had a lovely journey and took it very easy all the way up. We really enjoy driving on the motorway. David just points the Morris at the middle lane and before you know it we are in Scotland.

“Because we don’t have to change lanes or anything complicated David and I have plenty of time to wave at all the friendly people who flash and wave at us as they go past on either side. It’s really great fun.”

Chief Super Intendant Tony Croker, of the Lancashire Traffic Police, said Mr Jackers was “an arse” and a danger to himself and other drivers and called for the general pubic to force his Morris Minor off the road and into a ditch.

Robert Preston, 43,  photo-copier salesmen from Clydebank who was stuck in an eight mile tailback after a slow moving lorry took an hour and a half to overtake the Jackers, said: “Kill them, kill them now.” 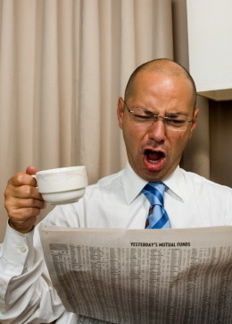 WORLD stock markets will move up and down a lot this week triggering a new ice age and a plague of painful boils on the arse of every homeowner.

Interest rates may also go up or down so everyone will either go bankrupt and lose their homes or buy a brand new sports car and ditch their spouse for someone younger and better looking.

Share prices will soar, plummet and then soar again, for no apparent reason, making a small number of already extremely wealthy people even more rich while plunging all normal people into poverty and starvation.

Evan Davies, the BBC’s economics editor, said: “You really have to think of the world economy as a giant fish.

“If it is swimming happily in shallow waters in a clockwise motion then long-term interest rates may well be on a downward curve, thanks to gyrations in the so-called sub-prime mortgage loans scandal, and the ice age may not start for another decade.

“But if the global economic fish is lying on its back in the sand, thrashing around and gasping for breath then none of us will be able to sit down for six years due to arse boils. It’s that simple.”

Meanwhile in a bid to bring some stability to the world’s troubled stock exchanges the International Monetary Fund has told share dealers to calm down and “stop fannying about”.

An IMF spokesman said: “These tossers in the stripey shirts may think running around shouting ‘sell, sell, sell’ is enormous fun but it’s not them who has to flog their children off as slaves to keep up the payments on the house.”

Alistair Darling, the new Chancellor of the Exchequer, said he did not have a clue what was going on and was “fucking bricking it”.