AS Prince Andrew will attest, it’s hard to tell if a friend is running a high-end sex trafficking operation. Look out for these subtle clues next time you pop round.

He knows too many women

If there’s always a large and constantly changing roster of young women at his house, your friend may not be running a feminist workshop. Especially if he keeps ordering them to wear tighter tops.

There are sex toys everywhere

It’s suspicious if there are vibrators, massage oil and sex swings everywhere. If your friend had become an Ann Summers rep he’d constantly be hassling you to buy something.

He and his partner don’t do normal couple things

Instead of going to B&Q or camping in the Cotswolds, your friend does things that are unusual for a loving couple, such as pimping out his girlfriend.

People think all men are obsessed with sex, but a friend who won’t shut up about it is a pain in the arse. Seriously, it’s like spending time with Quagmire from Family Guy, but without the jokes.

There’s an administrator for his girlfriends

Most of us don’t need a full-time employee to tell our other half where to be and what to wear. It’s suspicious because most couples would prioritise getting a cleaner instead to deal with all the bloody dog hairs.

His girlfriend gets paid for it

Paying your partner isn’t what you do in a normal relationship. If you find this surprising, you should book some intensive couples counselling. Plus you’ll save a fortune.

Not all men would leap at this awkward, impersonal opportunity. Especially as it sounds distinctly dodgy and you’ve never fancied a starring role in To Catch a Predator.

He knows lots of rich men

Does your friend strangely spend his time meeting women and discussing them with very rich men, almost as if he’s doing some sort of favour? Goodness, it’d take Hercule Poirot to work out what’s going on here.

A bit of a giveaway, not least because it’s the sort of career people tend not to forget. When did you last say, ‘My mate Carl works for an insurance firm. No, hang on, I meant to say he’s a contract killer.’

The police are always turning up to arrest him

This is a pretty strong indicator that your friend is breaking the law. Despite what he may claim, they don’t send the serious crime squad round for forgetting your girlfriend’s birthday. 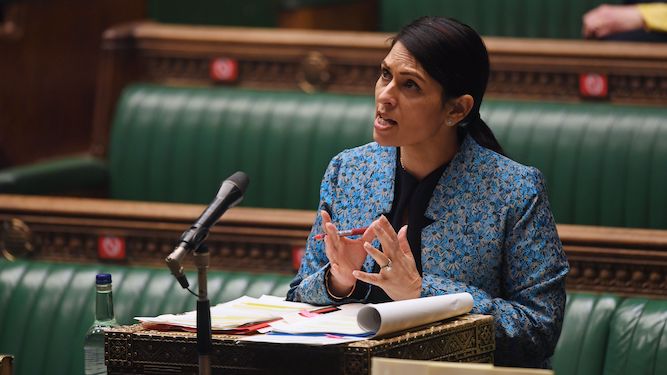 IN 2020 Priti Patel said she’d call the police to report a neighbour holding a party but now she’s defending Boris Johnson’s. Here’s her guide to whether a party breaks the law.

Could the party easily be mistaken for a work event?

Look, sometimes it’s hard to tell if you’re engaged in the vital work of running the country or at a garden party. The two are very similar. Well, they are if you’re very important like me. If you’ve got an ordinary job and you’re having a few cans with the neighbours in the garden it’s definitely illegal, as well as common.

Did you stumble on it by accident?

If you have an exceptionally large garden, as many members of the Conservative party do, it can be hard to keep track of what’s happening in it. Sometimes a party will suddenly spring up, and you’ll stumble into the middle of it on your way back from the orangery. Not illegal, just accidental.

Did you spend less than 25 minutes there?

It’s a truth universally acknowledged that an event only becomes a party when it enters its 26th minute. So even if you’ve downed a bottle of Shiraz and done a round of flaming sambucas in the time leading up to that, it’s not technically a party. This is an indisputable fact.

Did any of the guests arrive in a small boat?

I don’t mean a dinghy full of terrorists and freeloaders that has just crossed the channel. I mean a pleasure cruiser or a punt that’s been lazily poled down a river by a rich prick wearing a boater. The first is absolutely criminal and must be stopped at all costs, but the others are fine, especially if your vessel contains a hamper of Dom Perignon.

Are you a toadying sycophant who wants to lick the party host’s arse?

The best way to decide whether a party is criminal is to consider whether you are desperate for the party-holder to like you. Which I do, so Boris has done absolutely nothing wrong.