A man's options when a woman says 'It's nothing'

A MAN instinctively knows when a woman says ‘It’s nothing’, she means ‘It’s something’. But what really matters is the response that follows.

Say ‘Okay’ and forget about it

Very bad call. Acknowledging the problem yet showing little interest about something you’ve just been told is ‘nothing’ is totally the wrong thing to do. Make a big cup of coffee, psychologically steel yourself and take an hour or so slowly finding out what the problem is.

Talk about how you’re feeling instead

A woman initially refusing to explain her feelings is not a cue for a man to waffle on about the diversion he had to take on the way home because of roadworks.

Very risky. You might get away with pretending not to hear ‘It’s nothing’, but if you blank the follow-up ‘I said I don’t want to talk about it’, you’re in a whole world of trouble, and will have to keep up the pretence of zoning out for the rest of your soon-to-be-ended relationship.

Message her best friend to ask

Only ever to be used for gift ideas. Never use this option to determine the root of a problem, as you will become caught up in a problem now involving two women. You could ask her best friend to not mention it, but that won’t work.

Completely change the subject, for example ‘I wonder what the new James Bond film will be like?’ However a high-risk tactic, and something you should only attempt if you’re supremely confident, or most likely, a total coward.

The five best imaginary scandals to start a culture war over 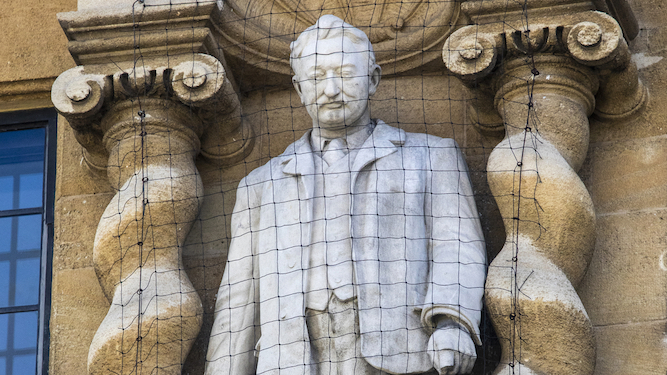 THERE might not be rationing or gas masks, but a war is raging right now: the ‘culture war’. Here are the best concocted scandals people are losing their shit over.

This slap in the face to the Princess Royal only came to light this week. It turns out she has not received a birthday card from the university in the last 30 years, clearly a deliberate snub. When asked, they said they had no plans to reverse this policy, prompting outrage.

These were revealed in a tweet by someone calling themself ‘Corbyn4life’ who no one had previously heard of. She told her 11 followers she would like to see a statue of the left-wing MP replacing our national hero. This is clearly a real thing that is definitely going to happen.

Campaign to have Myra HIndley’s face on £20 notes launched

There is no evidence that anyone is in favour of this. However it is important to get extremely angry about it. You cannot be too vigilant against these lunatics.

World War 2 to be removed from history lessons

The most important event of the 20th century will be expunged from the history taught to British children, shamefully. Dunkirk, ‘Bomber’ Harris and the eventual defeat of the Nazis will be replaced by lessons about environmental and transgender issues, possibly. So far the Daily Telegraph has written 27 articles about it.

His name was Nelson Mandela. How anyone could support this extremist is beyond belief.