Bros before hoes, and other dating advice from terminally single people

WANT to spend the rest of your life alone without even a whiff of romance? Follow this advice from permanently single twats.

And for the sake of equality: chicks before dicks. There’s a time and a place to prioritise your friends, but people who say this will think you’re under the thumb because you drove your partner to A&E instead of coming to the pub. And they’ll make that whip-crack sound when you explain.

In theory, a bit of playful teasing can create a passionate frisson. However this tactic is often taken to an extreme by cretins who haven’t been on a date in the last decade. It’s as if people don’t find being ignored and publicly humiliated romantic. Weird.

Wait three days before texting them

Chronic singletons say this stops you looking desperate, when in fact it just makes you look like an uninterested prick. Follow this advice and you’ll only have yourself to blame when your date inevitably meets someone richer, fitter and better at communicating in the meantime.

Play hard to get

A slight air of aloofness could make your crush work extra hard for your affection. Or more likely, they’ll think you’re stuck up and not worth the effort, then before you know it you’re in your late 40s with nothing to show for it except a Tinder Plus account and no matches.

The worst dating advice of all. Your real self stays up until 2am watching YouTube videos of what the world would be like if the Nazis won and must never be glimpsed by another soul. Create an artificial yet pleasant facade and get yourself locked into a doomed relationship like everyone else. 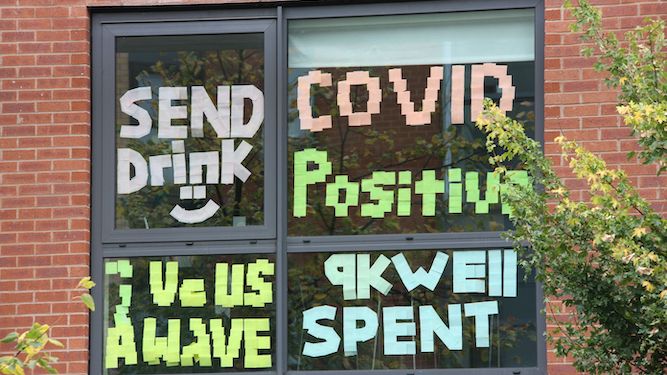 STUDENTS locked down in university halls have begun acting like normal people, it has been confirmed.

Freshers are discarding stupid affectations such as weird hats, fake accents and invented backstories as social isolation makes those things even more pointless.

“But I can’t go outside, so now I just wear my socks like everyone else. I’ve still got the boots but I’ll probably just wear them normally from now on.”

English Literature student Grace Wood-Morris said: “I spent the first week saying things were ‘sick’ instead of ‘good’, but with no one new to impress I just went back to my normal accent and dialect.

“It’s been days since I described anything as ‘bait’ and to be honest it feels liberating to admit I’m from the Home Counties.”

Refuse collectors on university routes have reported higher than usual amounts of trilbys, acoustic guitars and septum rings in their loads.