Lily Allen's guide to wanking in a relationship

Is wanking in a relationship disloyal to your partner?

No, it’s great for your relationship because if you’re too lazy to have sex you can be sexually satisfied and not feel resentful about having to ‘do it’. Also they might be a minger.

Will I go to Hell for wanking?

Don’t be silly! On the other hand, I am a pop star who did that slightly annoying cod-ska song ‘Smile’, not a theologian or someone directly in contact with God. So yes, there is a risk you could burn in Hell for all eternity.

Who should I think about while wanking?

I suppose you’ve got some pseudo-feminist bullshit about how wanking is empowering or something?

How did you guess? Yes, it’s very much a personal political statement about taking ownership of your own sexuality, not just rubbing your genitals. It’s very similar to the work of the Suffragettes.

Does your dad Keith Allen wank a lot?

Er, I’m not quite liberal enough to have discussed it directly with him, but the word ‘wanker’ does come up frequently in reference to him.

Why you have suddenly taken a deep interest in wanking? 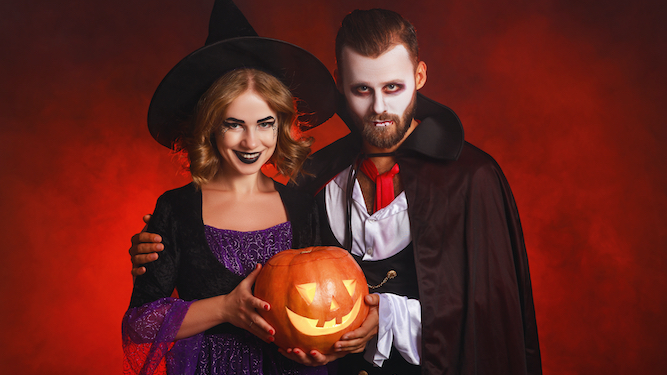 THE excitement of dressing up like a spooky character for Halloween is rising for children and weird adults.

As October 31st draws nearer, kids under 12 and grown-ups who should have a long, hard think about their lives are feverishly putting the final touches to their scary ensembles.

Nikki Hollis, 37, said: “I’ve been working on my Corpse Bride costume since June. It’s an exact replica of the one from the film.

“And my husband has made an Edward Scissorhands outfit with real scissors. It’s extremely dangerous and cost almost two hundred quid.

Friend Sophie Rodriguez said: “Their efforts are excessive any year, but the fact that Covid means the costumes will only be worn in their living room lends the 2020 outfit endeavour a particularly sad vide.

“I’ll be continuing my annual tradition of whacking some black eyeliner and a bin bag on at the last minute just to humour these immature weirdos.”