Couple brought together by shit sense of humour

A COUPLE enjoy a very successful relationship thanks to sharing the same dreadful sense of humour, they have revealed.

Tom Logan and Nikki Hollis are blissfully happy together and laugh constantly due to finding shit things hysterically funny.

Office manager Hollis said: “I first met Tom when we were seated next to each other at a wedding. After his 14th pun, I instinctively knew he was the one for me.

“He finally plucked up the courage to ask me on a date and I couldn’t stop laughing because he put a prawn on his fork and kept going ‘I’m a prawn!’ in a high-pitched voiced over and over again.

“We discovered we liked all the same things – Mrs Brown’s Boys, ‘Keep Calm and Carry On’ products and Steve Wright in the Afternoon.”

Marketing consultant Logan said: “Nikki has an amazing sense of humour. If Donald Trump is on the telly she’ll say ‘Donald Trump? Donald Fart more like’.

“Our perfect evening together is curling up on the sofa and laughing at all the funny adverts for comparison websites.” 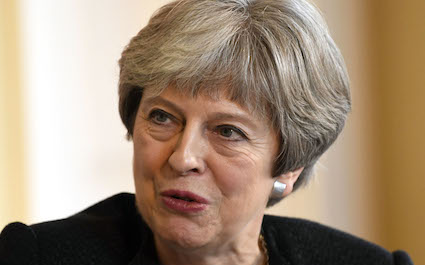 THE prime minister has demanded everyone in Britain look at her as she picks a fight with the EU that she will certainly lose.

May, whose previous skirmish ended with her metaphorically face-down on the playground tarmac with her arm twisted behind her back being forced to say ‘I’m a twat,’ wants everyone’s attention as she goes in for round two.

She added: “I don’t like your citizens, and they’re not getting equal rights! There, I said it! Now what are you doing about that, Mr Juncker?

“They can come here but we won’t let them in any of the good bits and they have to wear bells around their necks so everyone knows they’re foreign. Yeah.

“Now I want everyone in Britain to take note of how tough I’m being standing up to the EU just like the newspapers told me to. You can look away after this. The outcome isn’t important.

“How’d you like me now, Remainers? I’m the new Iron Lady delivering the Brexit the people want. Boo-yah. Get in the ring Michel Barnier. I’ll kick your bitchy little ass. Punk.”

EU president Donald Tusk said: “There is no doubt we will win. But somehow, it is still humiliating.”