A COUPLE who joked about how putting IKEA furniture together would ruin their relationship now have half a Billy bookcase and hate each other’s guts.

Donna Sheridan and Nathan Muir began the assembly process in high spirits, laughing about the rift it would cause, but have not spoken for four hours and do not know if they ever will again.

Sheridan said: “It seemed hilarious in the shop. All those couples who so clearly wanted to smother each other with Malisen throw cushions. How unlike them we were.

“But my illusion of Nathan as an intelligent and capable person has been shattered by watching him struggling to turn an Allen key for the 19th time.

“And yes, perhaps I didn’t realise from the patronisingly simple diagrams that some of the shelves were adjustable, but he didn’t have to be such a twat about it. We didn’t need every single fucking shelf, did we?

“I’m sure we’ll laugh together again. Just not about this specific thing.” 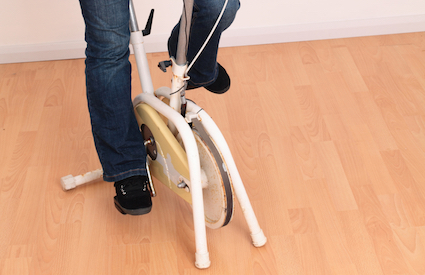 A WOMAN clearing out laundry from her spare room has unearthed an original 1982 exercise bike believed to be one of the first in Britain.

Mary Fisher, from Peterborough, was finally getting to the bottom of her washing pile when she recognised the distinctive shape of handlebars beneath a faded puffball skirt.

She said: “I couldn’t believe it. It must have been there, undisturbed, since before the dawn of breakfast television. Back then they still had a visible wheel.

“It looks like at some point it was used as an impromptu clothes maiden and then it snowballed from there. I never used it, of course – even back when they were exciting and new, we didn’t use them – so I didn’t notice it was gone.”

The bike, along with a Green Goddess fitness video and Thighmaster found while excavating earlier strata of laundry, will be donated to a local museum.

Fisher said: “It’s great to finally have that mess cleared out because now I’ve got room for an elliptical stepper.

“I’m getting healthy, you see.”