Dear Donna: Should I send my work crush a Valentine's card even though he's married?

MY boss is the dreamiest man alive. He’s got a high-powered job, he’s the life and soul of every party and recently I seem to always be by his side.

I just adore him. When people ask me about him I stammer and change the subject. But he’s recently married with two small children, seven years younger than me and in a spot of hot water at work.

I’m a romantic at heart, especially when it comes to poor Irish girls and the lord of the manor. I know he’s taken but I’ve heard rumours he’s willing to overlook it. Should I press my ardour with a card?

It’s clear you’re head over heels for this guy. And yes, he sounds charming, virile, playful and powerful. But do the two of you have a future?

Your fantasy life with him might not translate into reality. You might dream of eloping to a Caribbean beach, ruffling his hair and sipping cocktails and nibbling canapes together, perhaps rather more cocktails than canapes in your case.

But with all his children and debts, you’d more likely be necking cheap red wine in your back garden. And it concerns me that you say everyone thinks he’s a bellend and there’s only you and a lone Edwardian left by his side.

Take off your rose-tinted glasses and see what the country’s seeing. Would you still be as infatuated with him if he were suddenly, ie within the next four months certainly, redundant?

I’d avoid sending a Valentine. You risk coming across as a dangerously unhinged old bat throwing herself at a younger man in a desperate attempt to give your life meaning. It won’t end well. 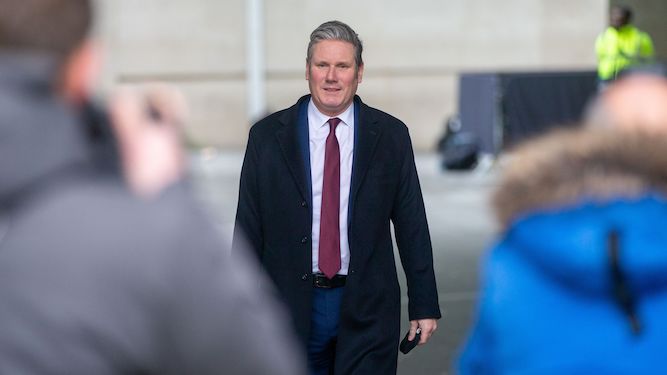 THE mob that chased Keir Starmer yesterday believe he has inherited the powers of Jimmy Savile and can ‘fix it’ for them to do whatever they want.

The Labour leader fled down Victoria Embankment away from the baying crowd, who refused to let him escape until he had fulfilled the requests they made in childish letters written 40 years earlier.

Steve Malley, aged 49, said: “Savile was a bad man. I know that now. But that doesn’t mean our dreams should go unrealised.

“When Starmer got Savile acquitted in court, which I remember happened now Boris said, he handed on his fixing-it powers to him as a gift. Starmer can fix it for me to meet Suzi Quatro. And he must.”

Fellow angry mob member Joanna Kramer said: “We all have different requests. I wanted to stand on the top of the Post Office Tower. Darryl wanted to do zero-gravity BMX tricks. Carl wanted to tap-dance with the Roly-Polys. Piers wanted to control the weather.

“Why should we live our lives unfulfilled and disappointed when, with a click of his fingers from his magic chair, Starmer could fix it for us and we could have our medals and everything?”

Boris Johnson said: “Keir Starmer cannot ‘fix it’ for anyone. That is specious nonsense on stilts and I apologise profoundly if I gave that impression.