'I was hoping you'd have a lightsaber,' says woman on arriving at date's flat

A WOMAN confirmed that she made the right choice of sexual partner when seeing a replica lightsaber mounted on the wall of his home.

Emma Bradford confessed that she was not entirely sure that Tom Logan was the kind of man she wanted to make love to until she saw the lightsaber, which she immediately recognised as Qui-Gon Jinn’s personal weapon from The Phantom Menace.

She said: “He’d said he liked Star Wars, but all men say that because they know it’s what women want to hear.

“But when I saw the lightsaber, an official licenced prop that must have cost him well over £200, I knew that he was the real deal and that my needs as a woman would be satisfied that night. And boy, were they.”

Logan said: “To be honest I wanted to tell Emma about the lightsaber – it comes with a Certificate of Authenticity, showing it’s 1,665 of 2,000 – on the very first date.

“But there are so many fake bitches out there looking to score with any guy who’s got the 7,541 piece Ultimate Lego Millennium Falcon that I kept it to myself.”

Bradford said: “He even made love like a Jedi. Yoda.”

Man refuses to accept it is too cold for shorts 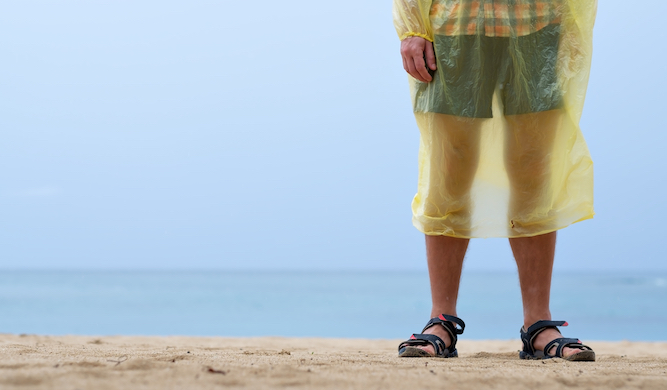 A MAN who has insisted on wearing shorts for every day of his UK holiday is refusing to concede that he is cold.

Nathan Muir has also worn a sunglasses and flip-flops throughout the fortnight’s break in Weymouth, even in heavy rain.

Wife Kelly said: “We’re all in waterproofs. He’s swanning around in cargo shorts and a Miami Beach T-shirt like he’s in the f**king Caribbean.

“I can see him shivering but it seems putting on a pair of jeans would be admitting defeat, as if his pale tuberous legs are going to shame the clouds into going away.

“Give it up, Nathan. You’re not ‘considering a sarong’ to look like 1998-era David Beckham. You’re considering it because you’re freezing.”

Nathan said: “It’s summer, I’m on holiday, therefore the weather is fantastic. It’s just clouded over a bit, that’s all.