Incredibly picky girlfriend refuses to have sex under filthy duvet

A MAN’S girlfriend is putting on airs and graces about bed linen that hardly smells at all, he has revealed.

Nikki Hollis refused to stay the night at boyfriend Tom Logan’s flat, citing the cleanliness of his duvet cover, despite it being freshly washed in February and only fairly rancid.

Logan said: “I used to think Nikki was a down-to-earth person, but it seems my duvet isn’t good enough for her. What next? Will she expect me to get a four-poster bed?

“My duvet isn’t ‘rank’ as Nikki claimed. Yes, some bits have an odd yellow hue, but that’s what happens to cotton. It discolours. And turns hard. It certainly doesn’t smell of ‘sweaty pigs on a hot day’.

“I’m worried she’s one of these horrible WAG types who want the perfect lifestyle. Well I’m sorry Nikki, but if you want to spend your time in spotless mansions and private jets you’d better find yourself a millionaire.

“I could be wrong and she’s suddenly developed a germ-phobia like Howard Hughes, and now sees a perfectly normal duvet as teeming with filth. That would make sense.”

However Hollis said: “If I’d slept under that duvet I would have thrown up. And I’m pretty sure Tom would have just moved the sick to one side and kept sleeping under the other half.”

Boris is such a liar, says Gove 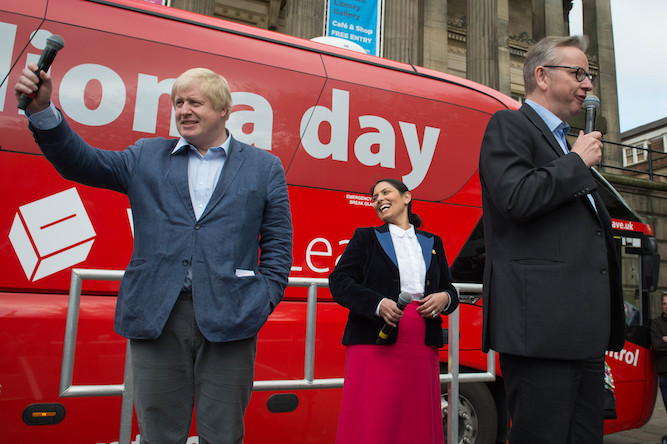 MICHAEL Gove has confirmed that Boris Johnson is the most appalling liar.

The Tory leadership candidate said his rival made a deliberate decision to stand in front of a bus with a preposterous claim written on the side if it and must be punished.

Gove added: “This is typical of Boris and is yet more evidence of why he is unfit for the highest office.

“Britain needs a prime minister who will behave responsibly and not stand in front of buses painted with obviously untrue slogans.

“That’s not me in the photograph, that’s Andrea Leadsom. I’m actually much taller.

“I was in a forest caring deeply about the environment.”