The sheet of paper taped to a lamp post describes missing cat Max as playful and curious in cloying detail, but fails to mention that he deliberately knocks mugs off tables and likes to claw people.

Owner Tom Booker said: “I had to bend the truth and say he’s sweet and easily startled, which couldn’t be further than the truth. He’s a f**king terror.

“Since Max has been gone it’s like a weight has been lifted. I’m no longer sharing my life with a little twat who brings dead, savaged birds into the house and insists on watching me go to the toilet.

“I actually regret putting up the poster, but I’d look like a right uncaring bastard if I hadn’t.”

Upon hearing that Booker thought he was better off without him, Max promptly returned home and took a shit on his bed.

Is your house haunted or are you a gullible idiot? 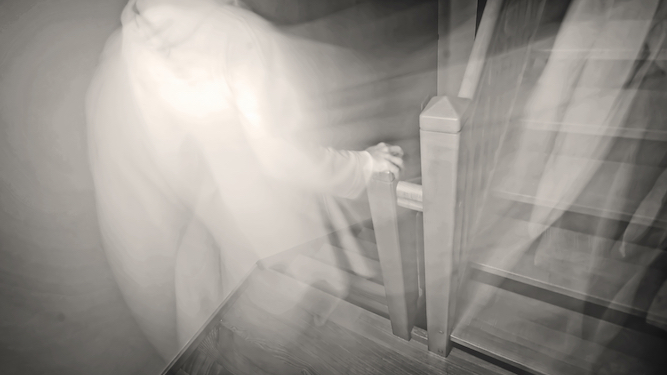 WAS that a bump in the night, or have you watched too many episodes of Most Haunted? Take our quiz to find out if ghosts are real or you’re a suggestible idiot:

Do you experience unusual smells?

A) Yes. For example, even though I have never smoked, every night at midnight I wake up choking on the stench of burning cigars.

B) For some weird reason, every time I have a curry, about an hour later everywhere around me smells like a dead animal or raw sewage. No explanation.

Have you noticed any unexplained temperature changes?

A)  One square foot spot in my kitchen, away from any drafts, suddenly drops to freezing and makes my hair stand on end.

B)  My house is always really warm, right? But then, every September, it gets really cold and stays like that for months. Creepy.

Is your house echoing with disturbing noises?

A) I often hear a child singing Victorian nursery rhymes, before the walls shake with a deafening scream of ‘LEAVE THIS PLACE!’

B) All the time. I have a ghost in my house that makes noises that sound just like a boiler turning on.

Do objects move around all by themselves?

A) Whenever a full moon appears in the sky, every cupboard door flies open and their contents fly directly at my head.

B) I’ve never actually seen anything move, but stuff ends up in different places all the time. Keys, pens, TV remotes – you name it. Even my kids, husband and dog are mystified.

Have you ever seen an actual ghost?

A) Yes, a medieval minstrel called Humphrey visits me often. He tells me all about his life, what it was like to die and every mystery of the great beyond.

B) No, but that doesn’t mean they’re not real. I’ve never seen a alien either, and they’ve got them in Area 51.

Mostly As: Congratulations! You have a genuinely haunted house. Ghosts are real and you will be the one to prove it. You are basically Egon Spengler.

Mostly Bs: Congratulations! You are a gullible idiot. So idiotic, in fact, that you will never be convinced that ghosts are not real, and will get hours of entertainment out of talking to other imbeciles about them. Have fun!