Man ruins date with honest answer to 'What are you looking for?'

A MAN has ruined a date by giving an honest answer to the question, ‘What are you looking for in a relationship?’

Tom Booker, 33, had been having an enjoyable evening in a restaurant with Nikki Hollis, 34, until the tricky question came up.

Booker said: “We’d been having a really good night. A few drinks, lots of laughs and even making plans to do a pub quiz next week.

“Then she asked me and I froze. I just completely panicked and told her the truth.

“I said I really just wanted someone to have sex with me a few times a week, cook sometimes and give me an excuse not to go out anymore.

“I’m such an idiot, I should have said love and babies and all that stuff.”

Hollis later complained to a friend that all she had wanted was someone to take lots of drugs with and do crazy sex stuff.

Friends stunned as useless mate gets life together 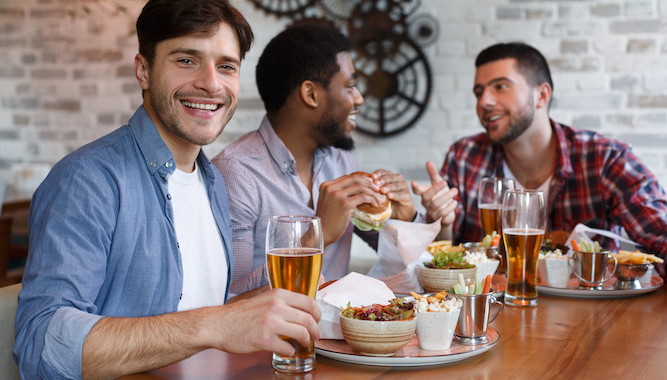 A GROUP of friends has been let down by the useless anchor of the group getting his life together.

Tom Booker, aged 36, has been dependably disastrous at everything for decades, serving as a useful benchmark for his pals to favourably measure themselves against.

Lifelong friend Steve Malley said: “Tom’s a great mate. He’s always been there for me to make me feel better about my own choices.

“Whether you need a pal for all-day drinking, a shoulder to cry on at 3am or simply someone to buy your spare gig ticket, Tom’s the man. Because he’s always single, out of work and making poor financial decisions.

“Whatever your work, relationship or family problems, Tom’s were dizzyingly worse. But now he’s got a job, he’s seeing someone and he’s made up with his sister. Uh?”

Friend Nikki Hollis agreed: “Obviously, we’re all, like, technically happy for him, but now he’s not regularly flooding his mum’s house and getting speeding tickets it’s putting a lot of pressure on the rest of us.”

The role of group mess will be handed over at the end of the month to Frank, who last month got drunk in Dublin and made some unwise contraceptive choices.