A MAN has started an argument with his girlfriend in the misguided belief that it could lead to mind-blowing make-up sex.

Whittaker said: “Make-up sex is item 19 of 23 Ways To Spice Up Your Sex Life but now I think I might be single. Uh?

“All I did was criticise Lauren’s spending habits, then when she admitted it was getting out of hand I upped the stakes by accusing her of having an affair. Now she’s locked herself in the bathroom and won’t talk to me, and I don’t think it’s because she’s playing hard to get.

“I can’t back down now, because women don’t like beta males, but I have to admit I’m struggling to keep thinking her crying down the phone to her sister is foreplay.

“Maybe when there’s a lull in the conversation I’ll knock on and say ‘Fancy doing it?’”

After watching Lauren pack her possessions into her car and drive away, Whittaker said: “If my calculations are correct, we’re a couple of hours from the most earth-shattering shag.” 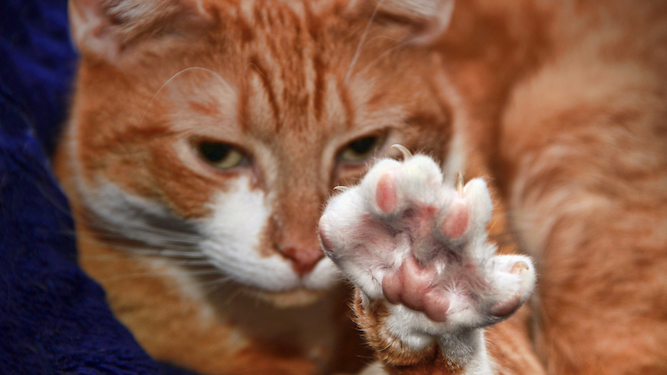 A CAT has expressed its love for its owner by slicing his face open with its knife-like claws, he has confirmed.

He said: “It’s difficult with a cat. They’re so independent that you don’t always know how they feel about you, until something lovely like this.

“Sure, I feel that thrill of affection when she brings me dead birds but it’s been a while since I had one of those. Where’s my reward for feeding her and cleaning out her litter tray?

“I’ll confess that I was beginning to have my doubts. But all it took was a quick bit of laceration to be reminded that she really does love me after all.

Mittens said: “I’m just glad my out-of-the-box thinking paid off. It felt like my carving uppercut was rolling the dice, but he took it in the spirit it was intended. We’re closer than ever now.”