Mum suggesting another game of hide-and-seek

A MUM quarantined with her children is suggesting another game of hide-and-seek.

Nikki Hollis has been at home with her primary-aged children for what feels like several years now and has found that the game has become an essential method of self-care.

She said: “We used to play hide-and-seek occasionally in the Before Times, and I found it a bit of a tedious faff.

“But now it’s two minutes – sometimes four – of blissful quiet in the wardrobe or under the bed, willing them to bugger off and look downstairs again.”

Hollis explained that her need for alone time had led to some innovations in hiding, with a particularly effective seven minutes nabbed by removing the side panel on the bath and crawling underneath.

She said: “I’m also experimenting with stashing bottles of wine in various places to make it through the days. I suppose we do run the risk of the kids finding them, but then at least they’d nap for longer.”

Hollis added that she had also used the game as a means of getting space from her husband, who she left hiding in the shed for three hours while she went on Instagram. 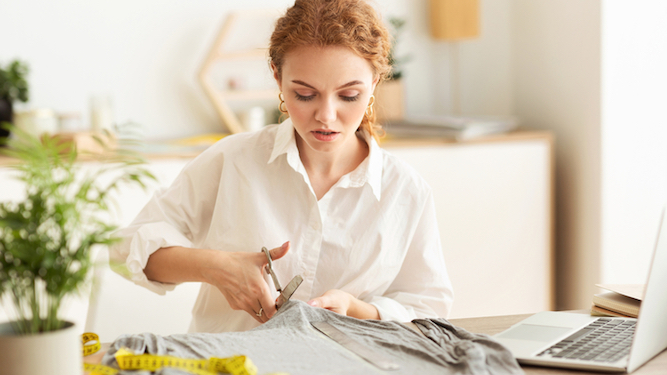 A WOMAN crafting protective face masks for her family is enjoying getting rid of shirts belonging to her husband that she has always hated.

Mary Fisher is keen to protect her loved ones from infection, and has taken it upon herself to cut up all of her husband’s shittest clothes as part of the precautionary measures.

Fisher said: “Being able to repurpose the hideous shirts my husband insists on making me look at almost makes the daily horror of the pandemic bearable.

“The paisley nightmares were the first to go, and I’m currently making my way through the Hawaiian one that he always wears on holiday even though other tourists make ‘wanker’ gestures behind his back.

‘I’m especially excited to hack up his t-shirt from our university climbing team that is now a sad, moth-eaten reminder of how much fun we had before we agreed to stop shagging around.

‘Once I’ve made masks for the family and neighbours, I’ll be making more for the local primary school. It’s just my way of giving something back, and also stopping my husband from looking like a twat.”