FIRST dates are tricky, unless your date makes it unambiguously clear that a second date would be a mistake by doing one of these:

She puked in her handbag

Having a couple of drinks to calm nerves is normal. Arriving shitfaced is worrying, and carrying on drinking to the point where you discreetly vomit in your handbag is an absolute deal-breaker. If you had to pour them into a cab and give the driver an extra £50 for his upholstery, they’re not The One.

He only looked up from his phone once

And that was when the barman dropped a glass and everyone cheered. Yes, phones contain the internet which contains the entire world, but you’ll be spending the rest of your relationship looking at screens rather than each other, so put it down for one night.

She talked about politics

Obviously you’ll have to talk politics at some point, otherwise you’ll be in too deep to end the relationship when the next election comes and she votes Lib Dem. However, anyone talking very intensely about Britain First’s values-focused politics before the starter arrives is practically screaming ‘f**k off now’.

He wouldn’t f**king shut up about his ex

Whether talking them up or slagging them off, if he can’t shut up about his ex then he’s not over his bloody ex, is he? Ditch immediately or you’ll have to put up with him still banging on about what a bitch Jenny was when you’re 75.

She suggests going for a fortnight’s holiday in Portugal

Some people come on a bit strong on a first date, and some go wild-eyed at commitment like a tiger chasing fleeing prey. Never go further than Bognor Regis with someone you’ve only met once because, though they won’t be a murderer, they will be repulsively needy. 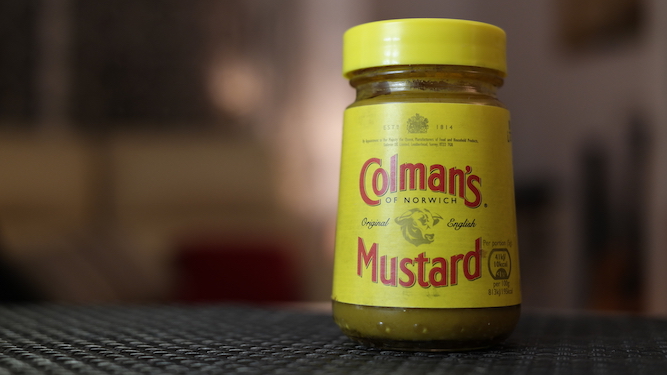 The name tells you everything you need to know – ENGLISH mustard, not poncy French Dijon crap. Granted it burns your palate to buggery and there’s always twice as much left on the plate than you’ve actually eaten, but the glow of national pride more than makes up for that.

Foreigners wouldn’t have the culinary imagination to create a watery sauce of molasses, vinegar and anchovies, named after a great English city I think is in the Midlands. Lasts for ages so is great value – I’ve still got a bottle in the kitchen from 2003.

As British as shit summers and supermarket panic-buying, ketchup goes with absolutely everything, from chips to loads of other things. And tomatoes obviously all come from Britain because Tom next door grows them in his greenhouse. That’s cast-iron proof to me.

I’ll admit I haven’t got a clue what’s in salad cream but it’s probably mayonnaise, sugar and some custard for colour. Nothing brings out the delicate flavour of an English summer salad like smothering it in this deliciously gloopy, additive-laden goo. And mayonnaise might sound French but I asked a Frenchman and he wouldn’t touch this shit.

Invented by our great entrepreneur Richard Branston, the first Brit in space, I’ve never actually tried this one but I don’t have to to know that it’s bloody great and better than chilli and garlic and that bollocks. I bet there’s still plenty of this on the shelves.

Nothing epitomises the peak of British culinary perfection like Marmite. Made of beer leftovers and saltier than a lungful of seawater, spread on toast it’s Britain on a plate. We should make every immigrant eat this at customs and if they so much as pull a face they’re out.