A SINGLE man has spent the weekend mourning his washing up sponge.

Tom Logan, from north London, was using his sponge to wipe chicken tikka masala off his kitchen counter when he noticed the first sign of trouble.

Logan said: “I gave the sponge a good wring, and the side with the scrubby bits peeled off like a banana.”

To save the sponge – which he has had since his ex-girlfriend moved out nine months ago leaving behind various cleaning products – Logan clamped both sides together with glue.

The solution held for five days until tragedy struck around noon on Saturday.

Logan added: “Sponges are a breeding ground for bacteria and you have to disinfect them. So I soaked the sponge in soapy water and popped it in the microwave.”

Within seconds the glue fumes and intense heat caused the dry sponge to ignite.

Logan said: “I went for a piss and when I came back my sponge was on fire.

“I managed to pry open the microwave and throw water on the flames, but it was too late. The sponge disintegrated in my hand.

“And it’s completely my fault. A dish sponge is something you cherish every day so it lasts for years. You can’t swoop in at the end with a grand gesture and expect things to work out. I don’t know if I will ever be able to forgive myself.”

Everyone kind of hoping Attenborough and the Queen get together 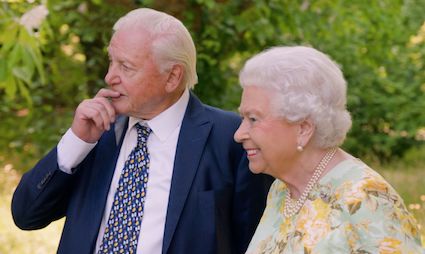 EVERYONE in Britain would be happy if David Attenborough and the Queen eventually became a couple, it has been confirmed.

As the monarch and the naturalist appear in a landmark documentary, Britain is hoping that Attenborough and the Queen will exchange phone numbers at the end and agree to go ballroom dancing together sometime.

Jane Thomson, from Stevenage, said: “David Attenborough would make a great king. Or a sort of ‘step-king’ anyway.

“The two of them could go for walks, read the obituary pages together and laugh at Prince Charles.”

A Buckingham Palace spokesman said Prince Philip was ‘cool with it’ adding: “He knows she is going to outlive him by at least a decade and is fine with the idea of her ‘moving on’.

“As long as it is actually Attenborough and not the French or Chinese equivalent.”