Six people you're not allowed to find attractive

ALL’S fair in love and war, right? No. Because if you fancy the wrong person you are a terrible individual or even a pervert. So under no circumstances fancy these people.

Obviously keep this to yourself. But also beware of your wife saying ‘Emma’s attractive, isn’t she?’ and agreeing just to show you like her friends, because then you’ll be in the shit for a very long time.

The one you actually fancied in the first place before finding yourself paired off with your now boring old spouse. But it’s fraught with danger because he might actually be up for an affair and you don’t want a theoretical sexual fantasy to become a guilt-laden, sticky reality.

This should technically be okay because you’ll never meet him, but there’s no question you DO fancy him. Mere mortal men like your partner know it and cannot compete, so basically you’re having an affair in 18th century Cornwall via the telly.

This fresh-faced babe straight out of teacher training college really doesn’t need another dad staring down her blouse as she tries engage you in how Oscar is getting better at sums. Although frankly it’s a miracle he can concentrate on his lessons at all.

Back in the 1970s Lumley played stunning heroines like Purdey in The New Avengers, although it’s best to try and forget about the haircuts. However it must be said that at 74 she’s really quite old so it’s borderline wrong. On the other hand she did play Sapphire in Sapphire & Steel. Tough call.

No one can argue that they’re not attractive, and they’re not really a close family member, but there’s still that small matter of incest. And you’ve seen those pictures of inbred American hillbillies with huge ears.

How I'd easily sort out Northern Ireland, by a Brexiter 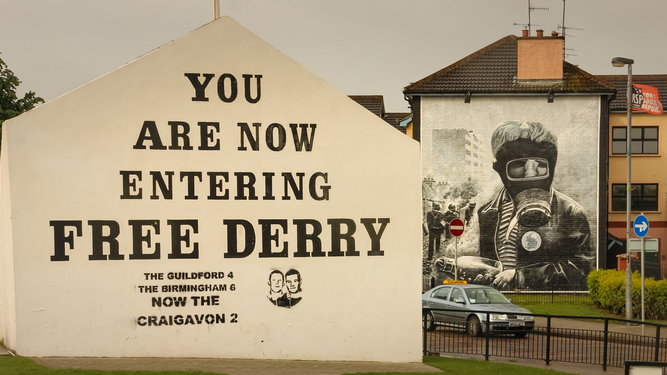 RENEWED violence in Northern Ireland is a worrying development. Luckily Leave voter Roy Hobbs is here to offer his typically simplistic Brexiter solutions to the problem.

‘Catholist’ and ‘Loyalican’ are just labels. If the two sides went down Spoons and had a few pints you’d realise you’ve got more in common than you think. You’re all Irish people who love ‘the blarney’, U2 and alcoholism, so why not?

Apparently checks on imports after Brexit have ‘raised tensions’ and there are ‘concerns’ about a hard border. What are you worrying about? We only need borders to keep foreigners out of Britain. It doesn’t affect you at all.

Just get behind Brexit

Brexit has loads of benefits – too many to mention here – so it will definitely be good for Ulster and Eire, as I believe they’re called. You could even become one country, maybe the United Kingdom of Ireland. I can’t see any problem there.

Ireland has to learn to stand on its own two feet eventually without our help, so get innovative! St Patrick’s Day is the sort of thing you could market around the globe, and what about leprechauns? I’d go to see those in a zoo. If you captured some Causeway Giants you’ve got bloody Jurassic Park.

Send the British army in

Okay, this is a last resort, but the British army is the best in the world and capable of dealing with any problem. I’m no expert on history but I’m sure Our Lads could easily calm things down in Northern Ireland.