The worst songs to include in a sex playlist

GETTING lucky? Need to set the mood? Don’t include these tracks if you don’t want your coitus interrupted:

Side one of Mike Oldfield’s instrumental classic is groundbreaking progressive rock without any distasteful or intrusive lyrics, but will bring your scheduled missionary sex to an early close because thoughts of The Exorcist are a real boner-killer. Even if you get past that, the track’s 25mins 30secs and you can only last 4mins 22secs.

Any song with ‘sex’ in the title should work, right? No. Hearing Tom Jones croon lyrics like ‘this bomb’s for lovin’ and you can shoot it far’ will make you and your partner immediately halt intercourse, get dressed in shameful silence, then embark on a life of celibacy.

This 1824 banger contains Ode To Joy, and the main dude from A Clockwork Orange got his rocks off to that in fast forward so it must be a musical aphrodisiac. The sexy bit doesn’t start until a good 40 minutes in though and there’s no way you’ve got the stamina.

High For This by The Weeknd

Undoubtedly made for f**king and sounds like it was made while f**king, so in theory a perfect choice. But as with all rappers contains much braggadocio and ego-tripping, and your own efforts will stutter to a halt because he’s doing it on crazy drugs in a Toronto penthouse and you’re doing it on Blossom Hill in a Kettering semi-detached.

The Birdie Song by The Tweets

The experts say laughter boosts your sex life, but don’t take that logic to the point of chucking on this 1981 novelty hit. Imagine if your partner actually got turned on by this and you had to listen to it every time you bumped uglies. Even furries would call that weird.

Anything your college band recorded

Seems like a clever way to show off your musical prowess to your lover, but then you’re trying to focus on foreplay while listening to a tinny recording of an angsty ballad you wrote about getting dumped. You’d be better off making out something arousing instead like the BBC shipping forecast or radio static. 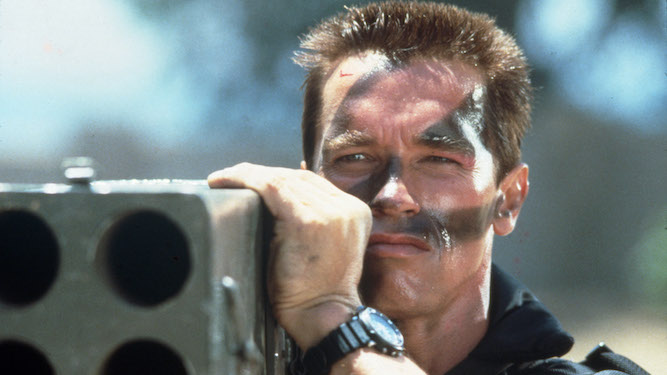 LOVE loud noises and people punching each other, but hate believable plots and dialogue? Here are five f**king stupid movies for the brain-dead:

The moment Hollywood first discovered that muscles and a post-mortem one-liner delivery system beat acting any day. Unbelievably homoerotic, full of stupid quips and stupider fights, starring a man with a heavy Austrian accent that goes unmentioned, Commando is a humourless bloodbath that will reduce your IQ to double figures.

It’s a pun? Because they’re on a ‘cruise’ ship? If you just got that now, this film won’t be an insult to the brain. No Keanu, Sandra Bullock now with another bloke saving mass transit passengers from disaster: it equals a film too bad to be so bad its good. Instead, it’s so bad it f**king sucks.

How do you make a movie about saving the earth this dumb? Michael Bay. If you want to spend your evening splayed out without thought, letting the nonsensical idea of sending miners to space and cheesy Aerosmith first-wedding-dance songs roll over you, you’ll get through it. You’ll just never do Sudoku again.

Asks the questions we were all asking in the 90s – what if a cop went back in time? And what if the cop was played by a Belgian narcissist with a palpable disdain for acting? And what if the plot didn’t make any sense? The answers are here for anyone who thinks they can survive it.

Face/Off is a better film the thicker you are. If you’re comprehensively moronic, it’s a f**king masterpiece. You won’t question why Nicolas Cage’s wife wouldn’t notice that her husband suddenly had John Travolta’s body, or how two men with different bone structures swap faces so seamlessly. You may even – God help you – think it’s clever.