Unimaginative man thinking of own girlfriend while having a wank

Muir said: “I suppose I could have spanked one out while thinking of Beyoncé or Lisa Ann or Sandra from work, but I’m a massive dullard so it didn’t really occur to me.

“Mind you, I did imagine that she was riding me while dressed as a cowgirl and wearing a gimp mask, so I guess I’m not completely without imagination.”

Bradford said: “I think it’s really sweet that Nathan thinks of me while tugging his pud. In fact I’d feel inadequate if he was having perverted thoughts about anyone else while rubbing one out.

“Having said that, I’m not about to stop flicking myself off while fantasising about Jason Momoa banging me from behind in the shower. It’s a lot better than sex with Nath.”

The Northern Lights, and other bucket list goals that aren't worth the trouble 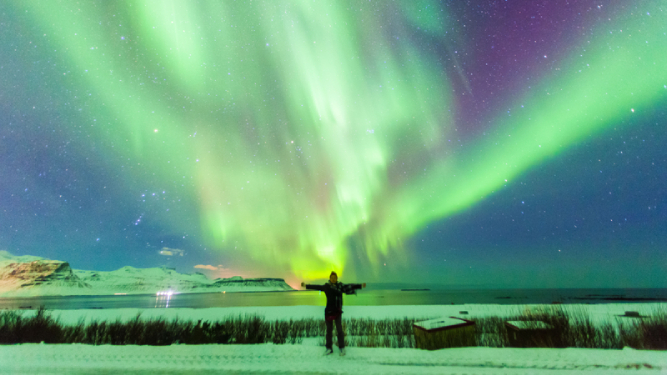 WANT to tick one of these goals off your bucket list? Just do the tick and not the thing, because it’s shit:

It’s a long way to the Arctic Circle, and all the countries you go through charge £24 for a burger and chips. They’re also freezing. Then you load into a bus to go somewhere even colder, and usually the Northern Lights aren’t feeling it that night so you’ve wasted your time. If you do see them you’ll say they’re amazing, but only not to look a prime dick.

Imagine how dolphins talk to each other about it. The shame of a distant cousin who’s sunk so low he hangs around boats in Miami trading spiritual experiences for fish. Humans paying through the nose for five minutes with a raddled crack whore cetacean. It degrades you both.

Fly in a hot air balloon

Arising at dawn, you climb aboard a hot air balloon and float low over the Serengeti while a few wildebeest mill around below. It’s cold and slow and your abiding memory will be of two commodities managers talking loudly about how much each balloon ride must clear after overheads. You thought you saw an elephant but it was a Jeep filled with ivory poachers.

There’s nothing better than climbing a burning mountain to gaze with watering eyes through smoke and sulphur at something that could kill you without even trying. For the few vague sparks you see you might as well have visited a Dudley iron foundry.

It’s pretty notable for sure, but it’s also notable for how far it is from f**king anything. First you travel to Australia, which is already on the other side of the world. Then you fly six hours to Alice Springs, then it’s six hours in a bus to Uluru. The memories you make will largely be of transportation.

The greatest music festival in the world is still a music festival. If you’re lucky it won’t piss down, you won’t get covered in shit, nobody will nick your stuff from your tent and you’ll be home before the following Wednesday. But you’ll be a different person afterwards, someone who thanks the toilet for existing.