Which idiotic romantic fantasy are you wasting your life on?

LOVE is blind, and stupid too if you’re lusting after people who are unavailable, inappropriate or straight-out idiots. Here’s how to snap yourself out of it.

Your best friend. You’ve loved your best friend for 16 years, and you’re sure this is the year they’ll finally dump their partner to be with you.

Solution: Get real. They’re taken and anyway, look at them. They’re a worn-out husk of the person you first met due to all those triathlons they do now. It would be like kissing a desiccated version of your own brother.

Mr Swift your GCSE Technology teacher. You had your first romantic stirrings when he sexily said “Wear goggles if you’re using the band saw”. You never spoke of your love, but are sure he’s coming back for you 23 years later.

Solution: Learn to count. He is probably very old now. He may even be dead from old age, or more likely the stress of teaching. (See also: Miss Jones, your hot Maths teacher from 1981.)

Jurgen Klopp. Yes, the Liverpool manager. Sure, he’s happily married and you have no interest in football but he seems to be the only man who ever talks any sense.

Solution: Sorry, but the only way Jurgen is going to end up in your bedroom is if you join the Liverpool Fan Club and stick a signed photo on the wall.

That man/woman on the train. You were on the 7:33 from Croydon one day when a vision of beauty brushed past you and apologised. You’ve been fantasising about marrying them ever since.

Solution: Stop building your future around a meeting that lasted less than a second. Definitely don’t keep taking the same train in the hope of meeting them again. The problem with total strangers is you just don’t know if they’re a weirdo who’s into colonic irrigation or roadkill meals made from dead badgers. 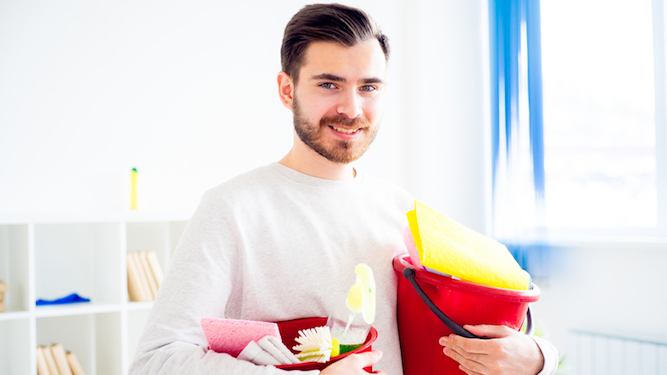 IN an incredible act of generosity, a man has done some cleaning and babysitting for his wife’s 40th birthday present.

Martin Bishop pulled out all the stops for the important date, wiping several worksurfaces and watching television with their two children for a staggering two-and-a-half hours.

Bishop said: “I wanted to do something special for Sarah’s big four-oh but she can be very difficult to buy presents for.

“Then I saw an article about International Women’s Day and it made me think, what if I did all her chores and agreed to babysit for her? Wouldn’t that be both an amazing present and a powerful statement?

“I’m sure she preferred it to an expensive watch or a luxury weekend break or something.”

In advance of his wife’s birthday, Bishop posted his intentions across social media where his thoughtful and imaginative present was praised by male friends.

Bishop added: “If people want to call me a hero, that’s up to them. But I’m just a simple man who wanted to say to his wife ‘This is your special night’.”

Wife Sarah said: “Bin bags. That’s what Martin’s getting for his birthday.”