A WIFE who is very bored of hearing the same anecdote yet again is lying in wait to ruin it at just the right moment.

Mary Fisher who knows all of her husband John’s anecdotes word-for-word is currently laughing along so as not to give away her plans to destroy it.

Husband John said: “Mary loves the time I went mountain biking with my German pen friend. You can tell because she laughs so much.”

Mary Fisher said: “I might just say the punch line and watch his face drop or interrupt at the final moment with a needless question, I’m not yet sure.

“Now I must wait and laugh like a hapless buffoon hiding my venom like the anecdote assassin I have become.

“If all goes well he will get annoyed, his voice will go quite high, he might even try and tell me off in front of the guests, I can barely wait.

DUP reminding everyone of that angry, dickhead flatmate 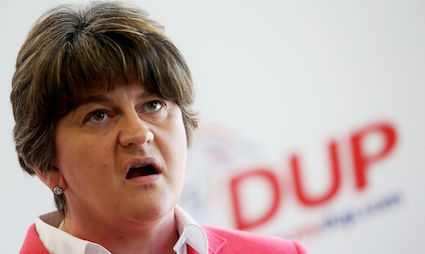 THE DUP is increasingly reminding the UK of that one flatmate they had who was always standing in the kitchen, arms folded, furious.

The party, which spends every hour of every day convinced it is being lied to, cheated and disrespected, is giving Britain flashbacks to its low-waged, flat-sharing years.

Nathan Muir, from Manchester, said: “God, you’d get home fancying a bit of telly and walk straight into a silent ‘house meeting’ they’d called because someone had used their conditioner.

“And from there it’d go into the chores rota, who had music on late when they had to be up to work on Tesco’s fish counter at 7am, and their unswerving, burning conviction that someone was hiding a kettle in their room.

“I can’t even remember their face anymore. I just see Arlene Foster, staring, trying to force me to confess it was me who broke her Scottie dog mug and hid the bits at the bottom of the bin.

“You’d end up moving out even though it cost you a month’s rent and your share of the deposit, just to get away before they itemised the phone bill. As Theresa May is doing now.”