A WOMAN having a good whinge about work to her husband wishes he would stop interrupting with ways to help.

Carolyn Ryan was expounding at length about the various arseholes in her office while husband Matt continually broke in with supposed ‘solutions’ to her problems that she had not asked for and did not listen to.

She said: “I was telling him what an absolute knobhead Martin from finance is and he pipes up with ‘Well can’t you check this month’s figures against the same month last year?’ as if that was the point.

“So I took a deep breath and told him instead about Donna’s rescheduled hen weekend, and he says ‘Just tell her you don’t want to spend £130 on a Go Ape outdoor experience in Northamptonshire followed by mocktails in the rain.’

“Does he think I’m an idiot? I don’t need help solving it. He was supposed to agree, and stroke my hair and murmur gently that yes, Donna is a crazy bitch.

“I don’t come to him for a viewpoint that differs from my own. He needs to offer murmured assent, reassurance that I’m right in all things and a glass of wine even if it is Monday.”

Matt said: “Carolyn spends a long time telling me her problems, so I’ve concluded my role is to provide a rational, balanced perspective and provide solutions. But when I do this, she tells me to piss off and phones her sister.”

The six teachers you f**king hated 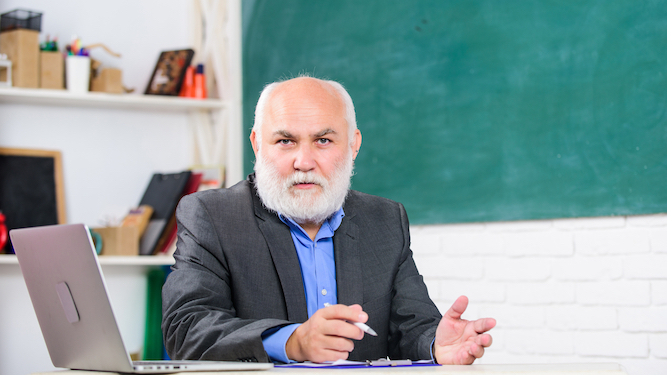 EVERYONE still remembers that one teacher that, even 30 years later, they hate with a passion entirely undimmed. Which of these was yours?

Who knows what Mr Robinson’s great sporting failure was? Let go by Liverpool after trials? Failed at athletics? But whatever it was, he vowed to take it out on every single kid in every single PE lesson. Whether rugby on frozen mud or screaming at a terrified seven-year-old to shin up a nine-foot rope, his bitterness never faded.

She didn’t need any past trauma to despise you. Instead she taught maths, presumably had passed a maths A-level at some point, and could not f**king believe a class of bored 13-year-olds were so slow to grasp what was obvious to her. Occasionally her frustration would boil over into vindictive anger, but only twice per lesson.

The design and technology teacher knew you were only in his class to selfishly injure yourself while making an ashtray, and he’d get the blame. So he spent 40 per cent of every lesson issuing dire warnings via anecdotes so bloody and lurid you’re still afraid to look at a drill.

Hadn’t originally been that bad a guy, but his name sounds like condom. He knew it, you knew it, he got his vicious, unforgettable retaliation about your acne in first.

Drama lessons are meant to be a doss, but Miss Blackburn had issues to work through. She’d decided that 14-year-olds who didn’t want to be there would be the vessel to fulfil her frustrated theatrical ambitions, and mounted a production of Night of the Iguana. You still feel the guilt of its total failure being entirely blamed on you.

Just a complete and total bastard and sadist, who as a child was taught by a bastard sadist and realised this was the career for him. Really loved his job, especially mentally torturing the kids. Would be touched that you still hate him. It’s what he got into teaching for.