14 Billion Tons Of Bullshit Pumped Into Firth Of Forth

EXPERTS warned of an environmental catastrophe last night after enough bullshit to fill 6.5 billion Vauxhall Zafiras poured into the Forth estuary.

The storage plant on the outskirts of Edinburgh has seen a sharp rise in untreated bullshit levels over the last month, culminating in yesterday's catastrophe.

"Trust me, that's a tremendous amount of bullshit.

"If you add a national election campaign to the mix then eventually something's got to give."

He added: "Once the Sunday papers were published it was only a matter of time before we had what we engineers call 'a humungous bullshit surge'.

Joseph Turner, professor of environmental health at Dundee University, warned of the unpleasant side effects of a bullshit surge.

"That level of bullshit can have a devastating effect on young people. Unfortunately there will now be a noticeable increase in the number of teenagers applying to do sociology or media studies. What a waste of time."

But within hours of the bullshit accident, levels were rising again as the SNP tried to blame the disaster on Labour policies, First Minister Jack McConnell "ordered an official inquiry" and dozens of BBC reporters wandered up and down Portobello beach trying to describe the smell.

Senior doctors, concerned at the rapidly increasing threat to public health, have pleaded with politicians and the media to "just shut the fuck up for a few hours".

The First Rule Of Toddler Fight Club Is... 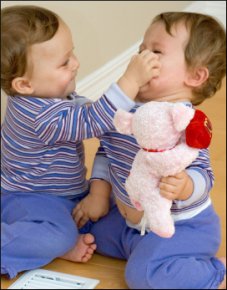 You do not talk about Toddler Fight Club.

OK, so you want to start a Toddler Fight Club. Don’t worry, it’s not as difficult as you may think. First of all you’ll need a couple of toddlers, preferably one with a bit of a temper. Then all you have to do is stick them in the garden together and wait. Before long one of them will throw a fist. What do you do now?

a) Break it up and chastise the aggressor.
b) Protect the victim.
c) Encourage a full-on scrap.

If you said ‘c’ you are well on your way.

Both toddlers may be a little traumatised after their first fight, but don’t worry. They will soon be overwhelmed with a tremendous sense of freedom and self-confidence. Once they’ve tasted their own blood they’ll never look back.

Now it’s time to expand. Mention it to other parents in the area, sound them out, drop hints, look for that glint in their eye. Before you know it you’ll have a core membership and some serious momentum.

It’s essential to have the right venue. A garden or a public park is okay for staged events to attract new members, but for fight nights you’ll need a place of your own. A large basement is perfect or perhaps you could hire the function room at your local bowling club. Make sure there’s plenty of juice and sweets, a nap area and soft play. The toddlers will need somewhere to go when they’re not in the fighting pit.

The fourth rule of Toddler Fight Club is: For Christ’s sake don’t video it and show it to people.

Inevitably the authorities will take an interest. But don’t lose sleep. A 12 month suspended sentence is the going rate and all you’ll need to do is lie low for a fortnight and then change venues. Before you know it those toddlers will be back in the ring and biffing the shit out of each other.