TECH giant Apple has met with a mixed response after unveiling a grey-haired man in a pair of jeans.

The corporation’s latest take on middle-aged manhood prompted a muted reaction from critics, who described it as ‘too similar to other men in an already crowded marketplace’ and ‘less characterful than the classic black polo neck version’.

Technology blogger Mary Fisher said: “Outwardly it is quite similar to last year’s Apple Man, but with subtle enhancements like extra thigh girth that suggests it does a bit of cycling.

“The real talking point though is the jeans, which are of a dark denim construction and possibly from Gap.

“We know Apple likes jeans on its men but a lot of people were hoping for chinos or Dockers-style cargo pants with a looser, more flattering construction. Maybe next time.”

Apple fan Tom Booker said: “I never thought I would desperately want a grey-haired man with a side parting, but anything that Apple puts out I instantly desire.

“I’m fine with the jeans, it’s a classic casual look so why change it? However they should do another version with the shirt untucked, I would buy both.” 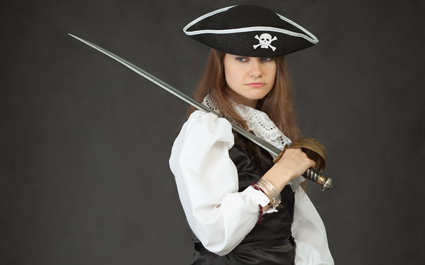 PIRATE personas are limited to saying one syllable in a funny voice, it has been confirmed.

Invitees to ‘Jamie’s 30th Pirate Party’ described how they struggled to create any real depth in their swashbuckling alter egos.

Guest Tom Logan said: “Considering how every outing and social event these days is pirate-themed, I wanted to have a good stab at this.

“I even did a preparatory brainstorm, using a whiteboard to write down words like ‘booty’, ’treasure’ and ‘muskets’. Really trying to get under the skin of the pirate as it were, thinking about what drives him to sail his ship around.

“However in practice this all boiled down to saying ‘Aaar’ and ‘Aahaar’.”

Fellow pirate party attendee Nikki Hollis said: “At first it was really fun waving our plastic cutlasses around. That lasted about half an hour.

“I don’t know what else pirates do apart from steal things and murder people, both of which are socially unacceptable.

“By 10pm everyone was saying ‘Aaar’ really unenthusiastically. It had become more like a mutual groan.”