A THING that is both black pudding and haggis has escaped from a high security butcher’s shop.

The meat-based abomination, known by its creators as ‘the blaggis’ slithered over a barbed wire fence at Booker and Sons Butcher, a family-run business with a sideline in genetic experimentation.

Butcher Tom Booker said: “You are right to be scared. It was chained up pretty heavily in the basement but it somehow managed to gnaw through the shackles and then melt a lead wall.

“It could be outside your window as we speak, though you would probably smell it.”

He added: “If you encounter it, lock all doors and windows and puff out your chest to look more threatening.

“However if you manage to run it over with a car I’d recommend slicing it into inch thick slices and frying it up, the flavour is surprisingly rich and moreish.”

A spokesperson for PETA said: “We’re pretty fine with you killing this thing.” 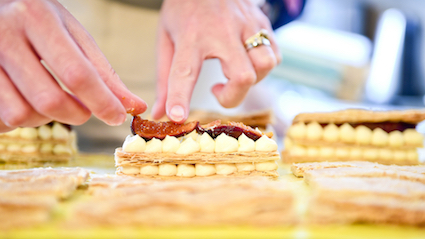 THE next series of Great British Bake Off will be part of Sky Sports’ roster of ultra-hyped events.

Initially set for Channel 4, the sacred cake show was swooped up by Sky, who broke the British TV transfer record just 30 minutes before the transfer window was set to close.

A Sky spokesman said: “We’ll revamp the format to show oven insertion from four different camera angles as well as post-bake interviews with the people who installed the ovens.

“With his carefully-sculpted grey hair and inadvisable earring, Paul Hollywood is the Charlie Nicholas of cooking so he will stay on the show, but we’ll probably replace Mary Berry with Kelly Brook.”

Sky will look to increase the number of bakes to four per week over a nine month period with several additional episodes per week dedicated to ingredient-by-ingredient dissection of every cake made.