A GROUND-breaking study into male and female brain function will make arguments even easier to start.

Scientists in America found that not only were men definitely told that her parents were visiting, it also confirmed that women could not read a fucking map if their multi-tasking lives depended on it.

Martin Bishop, a man from Peterborough with the innate ability to wire a plug, said: “These results prove what we already knew – my wife and I are different because her brain is defective and she’s a massive pain in the arse.

“So last week, when I asked her why the fuck is the map upside down? I was studying her brain.”

Susan Bishop, a woman from Peterborough who can juggle, said: “You did not say ‘why the fuck is the map upside down?’ you said ‘if it makes it easier, why don’t you try holding it the other way round?’.

“You then mumbled ‘you unbelievably stupid cow’.

“The study proves that my brain is better at remembering things than yours. Science says that you now have to shut your snivelling hole.”

Mr Bishop said: “Science also says you will electrocute yourself with a sink plunger. But that doesn’t matter because youre good at remembering.”

Mrs Bishop added: “And yet I cant remember the last time you made me orgasm.” 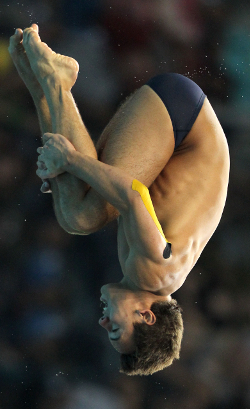 TOM Daleys sexuality is not a particularly big deal for society or diving, Clare Baldings gran has confirmed.

As the media sought frantically to convince you this was the 1950s, Clare Baldings gran dismissed the coverage of the Olympic heros coming out as the ‘inevitable result of newspapers that are lacking in self-confidence and hopelessly disconnected from their readers’.

“This manifests itself in acres of over-wrought, continually self-justifying prose, as they try so desperately hard to make everything seem important.

“We each retain the basic human right to decide what is and is not significant to us, as individuals.

“We must not allow ourselves to be oppressed by the dictatorship of manufactured opinion.”

Clare Baldings gran added: “Yes, I told Clare that I thought her relationship with Alice Arnold was disgusting, but she stormed off before I had the chance to explain.

“The truth is, I just dont like Alice Arnold. When I hear her voice it makes me think of Radio Four and I loathe Radio Four.