A CHUPA Chups lolly has defeated all attempts to remove its plastic wrapping.

The apple-flavoured sweet is currently being held in laboratory conditions as experts work to remove the wrapper, which is effectively fused to its stick.

Professor Henry Brubaker of the Institute for Studies said: “It’s impossible to unwrap manually, and the plastic is so tight that scissors are not an option.

“Other bladed instruments and lasers simply glance off the granite-hard boiled exterior of the Chup.

“Indeed we lost a technician last night when a weapons-grade laser beam reflected off the Chupa Chup and went straight through his torso.

“Possibly we could put it in a particle accelerator in the hope that the lolly atoms would somehow be displaced to the outside of the wrapper.

“You have to wonder what Chupa Chups were thinking when they designed these things.”

“They have built a successful brand on something that is both impossible to get into and very difficult to pronounce.

“Personally I say it ‘Choo-pa Choop’ but I’ve heard lots of variations from a short ‘u’ sound to a yeti-like double growl.”

Americans 'must be kept away from football' 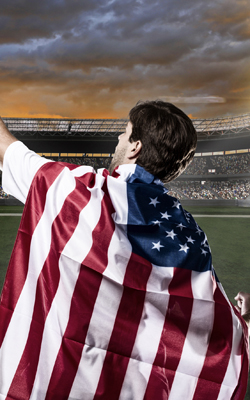 THE international community is working to stop America getting into football and beating everyone.

After the World Cup caused stirrings of enthusiasm for ‘soccer’, FIFA officials told the US that football hates God and that all the players have gay sex with each other.

A FIFA spokesman said: “America is a huge, rich and ethnically diverse county. If they decide to get serious about football the rest of us are fucked.

Imagine, a mix of Latin American, European and African footballers all on the same well-funded team? Every other nation would be crushed like bugs.

Its in everybodys interest to keep them thinking soccer is just for kids to take their MILFs to.

“So if an American asks you to explain the rules, say that the winning team gets to sodomise the losers and then burn their flag.

“Then add that most of the money made in soccer goes towards anti-gun campaigns and that David Beckham rides a push-bike.”

American Joe Turner said: Theres something wrong with the World Cup, in that we never win it.

“Its like theres an alternative universe where were not always the best at absolutely everything, and it scares me. Thank God for Hollywood.