THE notion of a so-called ‘darknet’ has confounded those who were sure the normal internet represented the very depths of human depravity.

The darknet is a hidden version of the internet, where people who are really good at computers exchange the sort of content that was once contained in padlocked books bound with human skin.

Normal internet user Tom Logan said: “The standard ‘vanilla net’ is a helter skelter of evil where two girls doing the most debased things imaginable into a cup is considered a harmless pop culture ‘meme’ and borderline work-friendly good-time.

“My concern is that this so-called darknet, despite its flimsy veneer of government-dodging civil-rightsiness, will drag mankind further into the pit with its next-level wickedness.

“At least that’s what I’ll be saying in court when explaining what inspired my ‘research’ on this nether-net into certain acts involving four girls, six recently-deceased kestrels and a drum full of paint stripper.”

The darknet relies on something called an ‘onion router’, so called because it has many layers, makes you cry and combines well with liver.

Technologist Emma Bradford described some things she found on the darknet: “Not only are there pictures of dead celebrities, you can make an actual dead celebrity corpse come out of your printer.

“I manufactured a mutilated JFK. Don’t do it, it uses 586 ink cartridges.

Andrew Lansley to watch you while you sleep 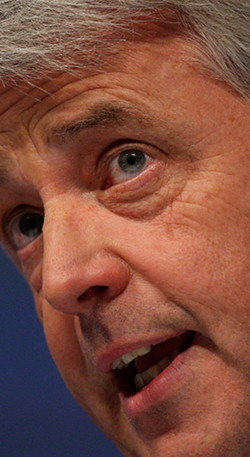 HEALTH secretary Andrew Lansley is to sit next to hospital patients, looking at them while they sleep.

Mr Lansley has opted for a more ‘hands-on’ approach after it emerged his televised bedside message was making patients want to die.

He said: “I want to be the first thing they see when they wake up. Some of them may be alarmed to find my nose two inches from theirs, but I have been practicing a range of soothing noises in case they start to scream.

“I will say, ‘there, there, everything’s fine, it’s just me, health secretary Andrew Lansley – would you like some porridge?’.

“Then I will tell them how much I care about them and how watching them while they sleep makes me feel me closer to them, especially when I stroke their hair and sing to them.”

He added: “It also means that if they start complaining about the NHS I can punch them in the face.”

Meanwhile soldiers fighting in Afghanistan will be fitted with a shoulder harness carrying a small TV screen showing a gung-ho message from defence secretary Philip Hammond on a never-ending loop.

A Ministry of Defence spokesman said: “He will start by thanking them and then give them a series of hints and tips about how to kill a Taleban when your gun stops working.

“He will then finish with a hearty rendition of God Save the Queen before lifting up his kilt like something out of Carry On Up the Khyber.”