God Found Earth Among Some Of His Other Stuff, Claims Expert

A NEW interpretation of the Bible suggests that God did not create the Earth, but stumbled upon it while looking for a magazine.

Dr Nathan Muir, a leading Hebrewologist, said the misunderstanding arose from the traditional translation of the word 'bara' which, he claims, does not mean 'to create' but to 'move the chest of drawers out a bit because it could easily have fallen down the back'.

He said: "Genesis clearly tells the story of God searching for an old copy of Omnipotent Digest that contained a picture of an otter giving a 'thumbs up' gesture.

"He had told one of His friends that it was very amusing and had promised to see if He couldn't dig it out.

"The passage goes on to describe how, while searching for the magazine, God found His spare set of van keys that He thought He'd lost ages ago, and then a blue-green ball thing that He considered taking outside for a kickabout before realising it was covered in tiny creatures."

Dr Muir admitted that it was still unclear how the Earth ended up in God's vast living room.

"It seems God lived in an infinitely massive shared house with three other supreme beings, and one of them may have left it lying around. The text reads, 'And God said lo, is this anyone's, because if it's not then I might have it, if that's alright."

But creationists have dismissed Dr Muir's interpretation, insisting any theory other than God constructing absolutely everything in six days, five and a half thousand years ago was 'dangerously unhinged'.

Rev Martin Bishop, of the First Church of the Immaculate Contraption, said: "The passage actually reads, 'And God did ask the beasts of the field, 'has anyone seen the magazine with the picture of that universe I created?'" 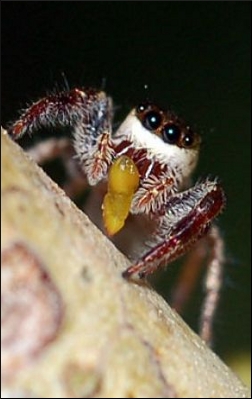 SCIENTISTS have discovered the world's first Guardian-reading spider and are already bored of its never-ending torrent of opinions about everything.

The Monbiot spider is a vegetarian for socio-political reasons, spins a sustainable quantity of low-carbon web and believes Gordon Brown can still turn it around by next June.

Experts have revealed that instead of eating flies and having a proper job like everybody else, the creature organises community outreach projects and converts floating seeds and vegetable matter into pungent, inedible casseroles.

The study found that the spider also has lots of gay spider friends and bears distinctive markings that resemble a fair trade t-shirt from Sri Lanka.

Zoologist Dr Stephen Malley, said: "When we first came across it, it seemed to be hosting a poorly-attended seminar about women's rights and press freedom in the former Yugoslavia.

"We tracked it back to its lair where it started rubbing its hind legs together and making a noise that sounded a bit like Michael Stipe.

"We then tried poking it with a stick to get it angry but it just presented us with a tiny cup of camomile tea and gave us some literature about Darfur."

He added: "I have discovered some incredibly annoying animals in my time, but I have always appreciated that they are part of a wondrous eco-system. But there is just something about this spider that makes me really want to stamp on it over and over again."

The Monbiot spider exhibits similar behavioural patterns to the Communards beetle, discovered in California, whose intricate mating dance seems to be based on the 1986 version of Don't Leave Me This Way.