Has VAR ruined your marriage? 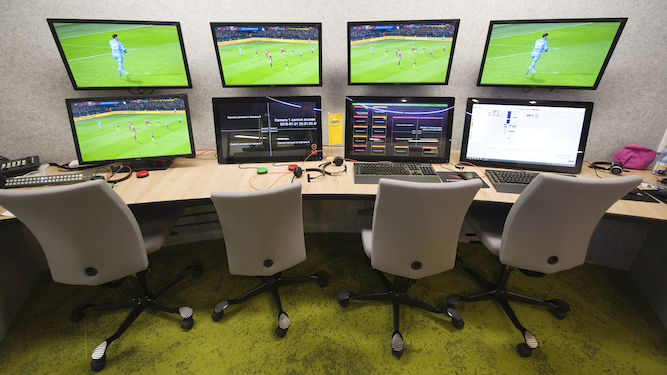 VAR, or video assistant referees, are causing controversy on football pitches. But are they also responsible for your failing marriage? Let’s take a look:

No, slowing down the camera would only make your failure to close the laptop before your partner saw what you had on there more excruciating. Plus VAR shouldn’t have to see what you were looking at. Nobody should.

Could VAR have stopped you being accused of having an affair with a colleague?

It’s a big yes from VAR – watching footage from the office’s summer barbecue would reveal that you were a few millimetres away from making contact with that colleague due to her skilful body swerve when you lunged. Her disgust is clearly visible on VAR. No way is that an affair.

Could VAR have stopped that final argument about money?

Regretfully, VAR played a key part in that argument by catching you sneaking cash from your partner’s wallet to pay off your dealer. Without VAR nobody would have noticed the slight pause as you passed the coats in the hall, but once it went to VAR it was as clear as day.

Could VAR have stopped your problem daytime drinking?

If you wouldn’t listen to friends, family and your boss then it’s unlikely that VAR, even if accompanied by footage from several angles of you collapsed on the floor slurring about everyone being out to get you, would stop you. It may have saved football, but it cannot save you.

Can you blame your failed marriage on VAR?

It might not be VAR’s fault, but of course you can blame your trainwreck of a marriage on VAR. Taking the blame for failure is what VAR is for. And who knows, maybe one day you’ll be allowed to see your children again. VAR permitting.

NEW research has confirmed that sex with an ex-partner does not count as infidelity, a moral lapse or even sex.

The news has been welcomed by Britons who have always assumed this was a convenient loophole but are glad to have it confirmed, regardless.

“However, sex with an ex doesn’t add to your total, doesn’t have to be disclosed to anyone new you’re dating because it’s technically part of your past, and can be kept secret from friends guilt-free.

“Even if it happens up to three times a week, because both parties will pretend it didn’t happen then in actuality it didn’t.

“So text an ex-partner today to meet for a coffee, some careers guidance or simply to affirm that you can remain friends, like adults.