VIRGIN is to raise the height of the seatback tray tables on its transatlantic flights by a number of inches after it emerged that love drug Viagra could now be used as a cure for jetlag.

Virgin founder Richard Branson said the airline wanted to provide extra third leg room for its male passengers, many of whom would now be crossing the Atlantic “in an upright position”.

He said the airline would also strip out at least 20 rows of seats at the rear of each aircraft and replace them with toilets to meet an expected surge in demand for mid-air hoggins.

Mr Branson said: “We want to be as flexible as possible in this situation, even if our male customers can’t be.

“We have no problem with men traveling in an upright position, but at take-off and landing we will still insist that all erections are stowed under the seat in front or placed securely in the overhead luggage bins provided, for obvious safety reasons.”

Mr Branson said that tourist class passengers would be restricted to two people per toilet for a maximum of five minutes. However those in First Class will be allowed to take as long as they like.

While the Virgin move was greeted with enthusiasm by the traveling public the pilot’s union Balpa said the plans were irresponsible.

“Excessive thrust applied to either side of the aircraft by couples during flight may destabilise the plane causing distress to non-randy customers.”

British Airways said it had no plans to install extra toilets at this moment but said it would keep a close eye on any major developments. Willie Walsh, chief executive, said: “Our staff will be monitoring the situation on a flight by flight basis, and they will deal with situations as they pop up.”

Michael O’Leary, the chief executive of the low cost airline Ryanair, said he did not give a “flying fuck” if anyone on his aircraft used Viagra.

But he said Ryanair would respond to any increased toilet demand in its traditional manner by charging customers to use its cubicles by the minute. “We already make them pay by the sheet for bog roll so it’s no big deal,” he said.

Big Brother House To Include Room Full Of Man-Eating Tigers 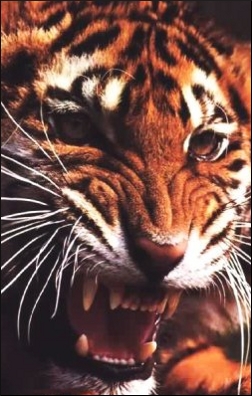 THIS year's Big Brother house is to include quirky new features including a toilet in the middle of the livingroom floor and a room full of tigers.

The compound, at Elstree Studios in Hertfordshire, has been described as "topsy turvy" with beds nailed to the wall, a fridge at the bottom of the garden and a beanbag instead of an oven.

But the producers admit the the most controversial aspect will be the six ravenous, 30 stone, man-eating Bengal tigers, housed in a room marked 'chocolate storage area'.

A Big Brother spokeswoman said: "Just imagine the looks on their faces when they go searching for Cream Eggs and find themselves staring down the barrel of a 10 foot long killing machine.

"Instead of a weekly eviction, we think the housemates should nominate each other to spend 20 minutes alone and unarmed in the 'chococlate room'. Just kidding. Or are we? There's only one way to find out."

Most tigers live in forests or grasslands, for which their camouflage is ideally suited, and where it is easy to hunt prey that are faster or more agile. Tigers hunt alone and eat medium to large sized herbivores including deer, wild pigs, water buffalo and receptionists.

The spokeswoman added: "The livingroom toilet will be a challenge, but what a great way to get to know each other.

"And after complaints from viewers we've recognised that the Diary Room was not lethal enough, so this year the walls will close-in if a housemate becomes too boring or starts crying.

"Oh yes, and the garden fridge is full of wasps."