Salmond To Generate Electricity By Rubbing Himself Against Shereen Nanjiani

FIRST minister Alex Salmond plans to satisfy the nation's energy needs by rubbing himself against a variety of high profile Scots.

Following the Executive's decision to oppose nuclear power, Salmond and his cabinet have focused on the search for cheap, clean alternatives.

The First Minister has now thrown his weight behind the strategy after a successful demonstration at Bute House yesterday, during which Salmond rubbed the top of Nicola Sturgeon's head.

The Scottish Cabinet is now convinced that vast amounts of static electricity can be generated at a community level and then stored in huge underground tanks attached to the National Grid.

The First Minister said: "If this country is to be nuclear-free it will require a great national effort, involving wind, wave and rubbing. I am prepared to give up two hours of my day for some very vigorous rubbing. Are you?"

Salmond has written to a host of Scottish celebrities, including BBC personalities Shereen Nanjiani, Jackie Bird and Brian Taylor, and business leaders such as dairy king Robert Wiseman and Anne Gloag of Stagecoach, asking them to come to Bute House for tests.

Golfer Colin Montgomerie is considering a request while Sir Sean Connery has given the project his blessing but declined to take part as he believes he is too old.

Salmond hopes thousands of other Scots will volunteer as power generators, using their spare time to rub themselves against friends, neighbours and colleagues.

According to researchers at Dundee University, the most efficient form of rubbing is back-to-back while wearing man-made fibres, though scientists are working on a pair of special gloves which will increase output by up to 30%

Dr Henry Brubaker, who perfected the rubbing technique, said: "It's quite tricky at first; you really need to find someone who is roughly the same size, or much much larger. But once you get the hang of it you'll find that it's unusually pleasant." 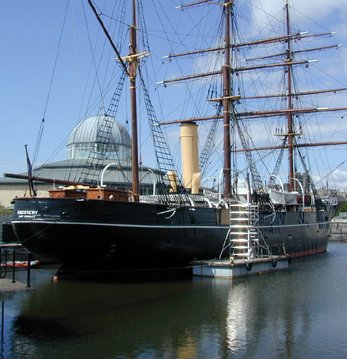 THE Dutch last night claimed responsibility for setting fire to the Scottish-built Cutty Sark and warned that no Scots ships were safe during the war with Holland.

Colonel Dik Van Possellink, of the elite 1st Edamers Airborne Division, said his men had torched the historic clipper ship to ensure it played no part in any Scots invasion force.

He said both the Discovery in Dundee and the Britannia at Leith would face similar attacks, and he warned elderly American tourists to stay clear of the Waverley and the Sir Walter Scott this summer saying both were “legitimate military targets”.

Michael J. Bilge, Commander RN Rtd. (HMS Ewing 1965-68), said the loss of the Cutty Sark was a major blow to Scottish preparations for the invasion of the Netherlands.

He said: “Without the Cutty Sark the Scottish Navy really is just the Discovery and Britannia, neither of which have been used in amphibious assaults before.

“If the Scots cannot muster an invasion fleet soon I fear the Dutch coast will be impregnable to invasion; already most of it is protected by a line of enormous dykes.”

First Minister, and commander in chief of the Scottish forces, Alex Salmond was contemptuous of this latest example of the Dutch’s flagrant disregard for the rules of war.

“This is an act of wanton vandalism by a nation of whose main knowledge of the techniques of modern warfare is limited to being overrun and surrendering.”

Dirk Van Poomf, spokesman for the Dutch consulate in Edinburgh, said the successful assault on the Cutty Sark proved that his nation’s relaxed view of homosexuality in the army was not incompatible with successful sneak assaults.

He said: “This just shows that men who love men and men who love women can together form an effective fighting force. As we say in Holland, inside every Dutch homosexual there is a soldier, or there has been, and vice versa.”