Internet commenter not sure why he's doing it

REGULAR internet commenter Tom Logan has admitted he is not even sure why he bothers.

Logan frequently posts comments on a wide range of websites, all of which provide him with broadly the same level of personal interaction as talking to a fridge.

Logan said: I was posting Holly looks GREAT!!! underneath an article about Holly Willoughbys latest photoshoot, when suddenly I realised it could not possibly matter to anyone.

It occurred to me that Holly was unlikely to come round and have sex with me just because Id posted a comment on the internet. And if she did, that would make her a bit of a slut and Id have to insist on using a condom.

At this point it dawned on me that the only people reading the comments were very sad women. And of course men sitting at home rubbing themselves, as indeed was I.

I then realised I had completely wasted a large part of my life posting comments on the internet, and had to buy some animals on Farmville to cheer myself up.

He added: I did once make quite a perceptive point about David Cameron on the Guardian website, but nobody replied because they were too busy accusing anyone who disagreed with them of being a troll.

Psychologist Donna Sheridan said: Internet commenters often find it difficult to stop commenting, because this would be an admission that all their previous comments were a total waste of time.

Its a bit like compulsive gambling, but without the intellectual and social stimulation of spending all day in Ladbrokes. 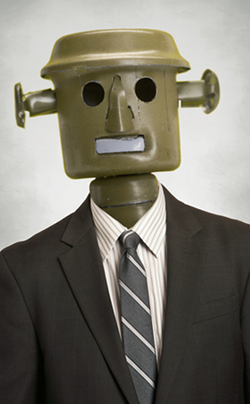 BAE Systems and EADS have decided to cancel their planned merger, after a robot from the future threatened to kill everyone involved.

According to the android, if the firms merged they would create an unstoppable mechanized army that would wipe out mankind by 2021.

The humanoid robot arrived from the future last weekend, appearing stark naked in the middle of the A12.

When asked why he travelled nude, the machine said: The scientists in charge of time travel are colossal perverts.”

The robot then gate-crashed a meeting between BAE Systems and EADS, and issued a stark warning.  He revealed that in less than 10 years mankind would lose a war with ferocious killing machines built by the two firms.

Representatives from the companies immediately called off the merger, admitting the prophesy ‘sounds like something we’d do’.

The robot has since moved in with Radio 1 DJ Fearne Cotton, who he describes as ‘the all time number one human’.

According to the robot: Before they died, all the future humans loved Fearne Cotton.

The public is now clamouring for BAE Systems and EADS to merge as quickly as possible and make their killing machines extra deadly.