APPLE’S latest iPhone will feature shape-shifting technology and can become anything from a mountain to a large pig.

The announcement explains wildly inconsistent online photos – of everything from a conventional smartphone, to a fleshy green fruit and a flock of geese – all purporting to show the device.

An Apple spokesman said: “All the images are genuine, even the one where it looks like a a busload of Scouts.

“Thanks to cutting-edge technology smashing the laws of physics, the iPhone 5 will constantly shift on a molecular level – becoming big things, small things, inanimate objects and animals.

“These transformations will happen completely at random and without warning, so that no one can copy the design.

“We were basically inspired by the notion of God as something that doesn’t have a defined shape, but is more of a spiritual energy. Also we watched John Carpenter’s film The Thing.”

Marketing consultant Emma Bradford said: “Not giving the iPhone 5 a fixed form is a shrewd business move. I mean, how do you copy something that is everything?

“That said, someone could sell you a stale potato claiming it was an iPhone 5 and you could never prove otherwise.”

Apple devotee Tom Logan said: “It sounds kind of impractical. What if I’m walking with my new iPhone in my pocket, and it suddenly changes into a raging water buffalo?

“Or it assumes the form of my former girlfriend and makes me fall in love, with tragic consequences?

“Is it even a phone? Or some sort of strange new intelligence that might decide to kill me and marry my wife? I’m confused.

“Of course I’ll still buy it, whatever.” 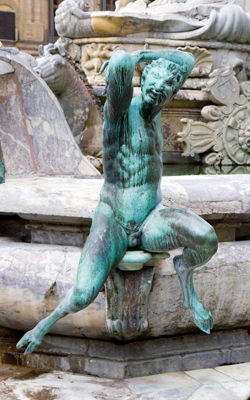 They will also make runners look like the Greek half-goat god Pan, in a nod to the Olympics’ classical origins.

A Paralympics spokesman said: “We’ve taken on board Pistorius’ feedback, and are banning non-hoofy leg prosthetics.

“Besides them making a satisfying ‘clop’ sound, we love the concept of Pan the virile man-goat, who was always sprinting away from angry villagers whose daughters he had shagged.

“Maybe he could be the next Paralympics mascot? Clearly it would be a vast improvement on those ‘Wedlock and Mandeville’ things that look like a pair of giant teeth.

Paralympics sprinter Roy Hobbs said: “This all sounds weird and vaguely perverted. Which I am into because I actually love shagging.

“Although the media was completely obsessed with Olympians’ sex lives, the Paralympians bedroom habits don’t get a look in, which seems a strange double standard.

“I’m definitely looking forward to doing it with some nymphs. Can we also have a pretend mystical ‘love dell’ backstage at the stadium?”