Man discovers bin is not a Stargate

A MAN who became wedged inside a public bin believed it was a form of inter-galactic transport.

Space explorer Tom Logan said that after years of research he had narrowed the location of the Stargate down to a bin somewhere in the centre of Aberdeen.

He added: “I stand by my calculations. I just chose the wrong bin.

“I shall be back out there tomorrow, squeezing my head into bins and looking for tell-tale signs of extra-terrestrial Egyptians.”

Meanwhile, experts said they were having none of that and insisted it was obviously yet another case of a Scotsman getting stuck in pursuit of an abandoned penny.

Professor Henry Brubaker, of the Institute for Studies, said: “He is a Scottish person. He sees something glinting. He thinks it is a coin. He must possess it.”

A spokesman for the Scottish National Party said: “It is the noble destiny of every Scottish person to get stuck in a bin while hunting for change.”

People across Scotland applauded the man’s determination and insisted they would have done exactly the same. 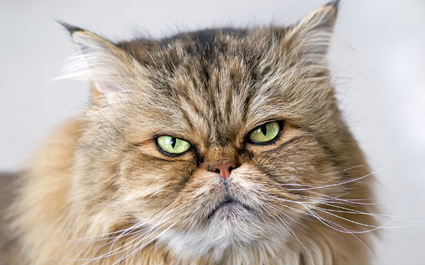 AN angry-looking cat who became an internet sensation was suffering from severe depression.

Three-year-old Rags became a Youtube hit thanks to his hangdog facial expression.

However the cat was actually going through some serious psychological shit, and died yesterday after jumping off a bridge.

Owner Tom Logan said: “I guess he looked that way for a reason.”