A MAN was sent into a spiral of shame and self-loathing after being confronted by his own recommended videos on YouTube.

Joe Turner, 36, logged on and was instantly bombarded with the kind of videos only a wanker would watch: compilations of people being seriously hurt, influencers showing off their enormous wealth, and Joe Rogan spouting bollocks about Covid.

Upon realising that all of the videos were specifically tailored to him based on his viewing habits, Turner was forced to face the unsettling possibility he may in fact be a humongous twat.

He said: “The first video was two women fighting in a McDonald’s, the next one was a guy pranking his girlfriend by throwing her laptop into the sea, and the third was two white blokes talking about why the gender pay gap is bullshit. It was just video after video of the sort of garbage only an utter dickhead would watch.

“Then it dawned on me I was looking at a list of videos specially chosen for me by YouTube’s super-intelligent algorithm. I’ll be honest, I do enjoy those kinds of videos – but seeing them all laid out like that was pretty hard to take.

“The truly shameful part is that one of the recommendations was James Corden doing Carpool Karaoke. It was like getting a glimpse into my own soul – and what I saw was very ugly.”

Turner has now deleted his cookies so he can briefly fool YouTube into thinking he is a normal human being. 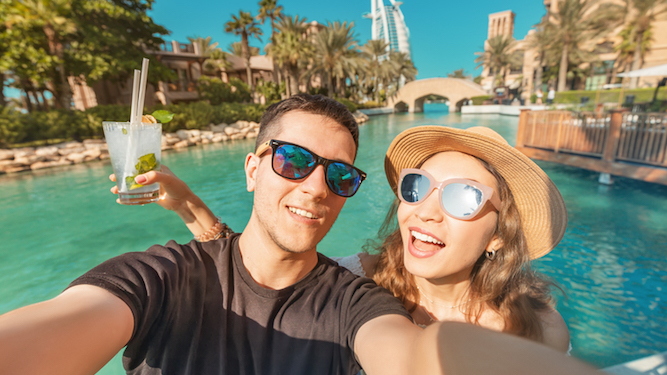 HOLIDAYS are a time of rest, relaxation, and taking the same tedious photos as everyone else. Such as these.

The view from the plane

Soaring above the clouds used to be impressive. Now, thanks to the bombardment of photos cluttering up social media, the miracle of flight is about as spectacular as a dental check-up or sorting the recycling. And at least those mundane activities aren’t accompanied by a string of self-satisfied hashtags designed to attract as big an audience as possible.

If you’ve seen one borderline acceptable hotel room you’ve seen them all. The sight of a neatly-made bed, bedside lamps and plugs with different sockets does not need to be photographed and beamed to a global audience. People crashing in shitty, dirt-cheap hostels should share their miserable accommodation instead – there’s nothing like a good laugh and a sneer.

What’s the point of going on holiday if you’re not going to show off about it? That’s clearly the thought process of people who insist on taking sunlit selfies featuring a cheeky (ie. smug) pout at the camera. People in the comments only enable this behaviour by writing ‘Wow, looks amazing!’ instead of ‘I f**king hate you and hope your flight home crashes’.

Legs by the pool

One for the ladies. Instead of actually swimming in the pool or sea you’ve spent hundreds of pounds getting to, it is apparently preferable to take a photo of your legs pointing towards it. Although if you’ve spent months toning and shaving your pins, it’s fair to want to flaunt them to more people than your partner, who pays you the wonderful compliment that they ‘look the same’.

Awkwardly standing by a landmark

The worst offender on the list. Nature didn’t spend millennia carving out the Niagara Falls and architects didn’t build Gothic cathedrals just so you could stand next to them gurning at a camera. You’re barely noticeable anyway because you’re surrounded by thousands of other people doing the same thing. It’s like a Where’s Wally picture populated by bellends.