Millionth Word Will Be Euphemism For Penis, Say Experts

THE millionth word to enter the English language will simply be another term for cock, experts confirmed last night.

According to the Institute for Studies the chances of the millionth word not being a graphic description of the male sex organ were so remote as to be not worth calculating.

Institute director Professor Henry Brubaker said: "To be counted, a word must be used 25,000 times in print and online, so if Gordon Ramsay decided to use a new word like 'gutfister' to bawl his staff out, it would enter the language in about a week.

"But the fact remains that more than 70% of all neologisms in the past 30 years have been some new way of describing your pink hairy piss nozzle."

Professor Brubaker added: "Our vocabulary is typically formed in our late teens when we're at university with nothing better to do so naturally conversation turns to inventing new words for your cock and balls.

"Meanwhile, social networking sites are helping to spread new words across the globe very rapidly, so a child in Mumbai may already be calling his knackers his 'sweaty judelaws' without even knowing its derivation."

The Institute has tracked the origin of 'meatsock' to an internet discussion on Gordon Brown, where 'StevieB1827' wrote: "Anyone who trusts that boss-eyed fraud can suck my meatsock while my pair of sweaty judelaws bang rhythmically off their chin." 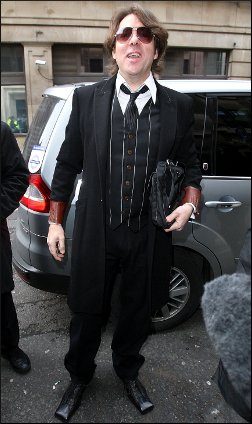 As BBC bosses said they would be forced to slash the salaries of some of the corporation's highest paid stars, viewers across the country wanted to know exactly what they were waiting for.

Margaret Gerving, from Doncaster, said: "You mean to say the BBC is short of cash after allowing a long list of talentless hacks to decide their own multi-million pound salaries? I find that very difficult to believe.

Tom Logan, from Finsbury Park, said: "I know there are some people who think Jonathan Ross, Jeremy Clarkson and Graham Norton add meaning and colour to their lives, but the thing you have to remember about those people is, they're stupid and wrong.

"At first it may seem a bit odd that Jonathan Ross is not on the telly anymore, but after a couple of days no-one – and I do mean absolutely no-one – will care."

He added: "I suppose Jonathan Ross could go back to being a researcher for a production company which is what he should have been doing all along if television wasn't run by total bastards."

Bill McKay, from Peterborough, volunteered his services to the BBC stressing he had thought about it constantly for over a month and had come to the unavoidable conclusion that he could not possibly be less talented than Jonathan Ross.

"So it's basically two hours a week asking dead-eyed celebrities about their piece-of-shit films and reading out some funny-but-true stories on Radio Two? I'll do it for a fifty grand.

"That should still leave me plenty of time to do voice-overs and enjoy a very comfortable standard of living."

He added: "And I promise to try my absolute level best not to use my two hours a week to phone-up a nice old man and offer to wank him into a cup."