NASA tells astronauts to just go ahead and eat each other

THE crew of the International Space Station has been told it will have to resort to cannibalism after a supply rocket blew up.

NASA admitted it was the only rocket it had left and that the astronauts had just 72 hours worth of food pouches.

A spokesman said: “Budget cuts. We cut the rocket budget and the food budget. And it was only mashed bananas in the first place.

“And we also cut the rescue budget. Anyway, if I was them I’d just get on with it. It’s going to be pretty messy up there for a few days.”

The spokesman added: “They are all trained professionals and dreadful show-offs so no-one’s going to go quietly – but the hand-to-hand combat will be brilliant.

“It’s a shame that guitar-playing hippy isn’t still up there. I suspect that would have made the whole process much simpler.”

I’m making it up as I go along, says Pope 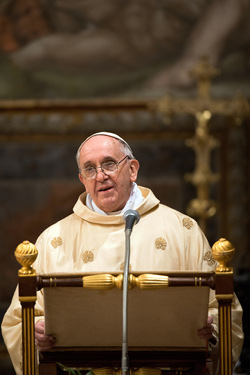 POPE Francis has admitted he is improvising, all the time.

The Pope said his view on evolution and creation was about five minutes old but that it sounded pretty good in his head.

His insisted his latest ad-hoc theory – that the Big Bang is real but it was an act of God – was worth a punt because the science is kind of theoretical anyway.

The key thing that makes me different from my predecessors is that I dont want to sound like a total freak.

I sometimes imagine Im talking to Stephen Fry. I know he wont necessarily agree with me, but as long as he doesnt actively scoff, then I just go ahead and say it.

Pope Francis revealed that most mornings he will have a coffee, read the papers and then start forming some nice, fresh opinions.

Im probably going to say something quite soon about vegetarianism and whether or not animals have souls.

I wouldn’t take it too seriously. I’m just an old Argentinian guy in a funny little hat.