CONSPIRACY theorists have poured scorn on the announcement of Neil Armstrong’s death, citing a lack of hard evidence.

Internet conspiracists are suspicious that no photographs of Armstrong’s body have been published, and believe the death is a publicity stunt to revive interest in the ‘so-called moon landings’.

Nathan Muir, of the moon landing denial group Apollo Zero, said: “Tom Hanks hasn’t made a movie in a while, interest in the whole astronaut fantasy is sagging – so all of a sudden, Neil Armstrong ‘dies’. How very convenient.

“I’ve sent an email to NASA asking for a peek in the coffin and they haven’t even replied. It’s Area 51 all over again.”

Conspiracy enthusiast Tom Booker said: “So now it’s boo hoo, what a shame it is we don’t go to the moon any more.

“And before you know it they’ll have built another papier mache rocket in Houston and hired a couple of thousand extras successfully sworn to secrecy to pose as scientists, mechanics, crew, spectators and astronauts.”

“They already did it once, and then five more times.

“Furthermore, there have been a spate of sightings of the ex-astronaut since the weekend, with dozens of reports from the Florida area of a man in his 80s matching Armstrong’s ‘bald, old-looking’ appearance, wandering around in perfect health.

“It’s so obvious why they’re doing it, too – to distract us from the fact that Cheerios breakfast cereal is actually tiny homing devices that sit in your stomach sending messages to the government.

“I bet Armstrong’s sitting in some East Coast golfing resort with John F Kennedy right now, laughing it up. What, the assassination?

“Come on, that was Tony Curtis and Marilyn Monroe in a black wig in the back of that car, Jack Lemmon as Oswald, with Billy Wilder directing from the grassy knoll.” 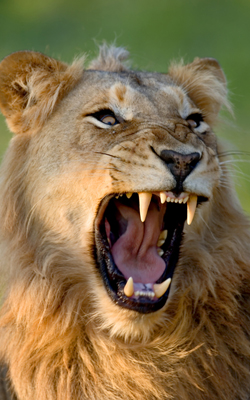 AN ESSEX man had admitted the ‘lion’ he saw near his home was actually a design on the wrapper of a chocolate bar.

However it has since emerged that Logan was eating a Lion Bar at the time, and simply failed to distinguish between the picture of a lion on the packaging of the chewy confectionary and an actual lion.

He said: “All I remember was this immense slavering beast really near my mouth. It had a powerful smell, sort of like caramel.”

Police have since recovered a Lion Bar wrapper from the woods where the alleged beast was sighted.

Logan said: “You have to admit it’s realistic and scary. I can’t even look at it.”

Detective Inspector Emma Bradford said: “When we interviewed Tom Logan about his experience, he described the lion as having a disembodied head floating against a brown backdrop with the word ‘Lion’ appearing next to it in yellow writing.

“I went to the vending machine, got a Lion Bar and when I showed it to him, he started screaming.

Logan said: “Nestle shouldn’t use such frightening images on their products. If the bar had been called ‘Horse Bar’ with a picture of a horse on it this never would have happened.”

It has since emerged that Logan recently called the police reporting ‘three leprechauns’ on his kitchen table, which were found to be the design on a Rice Krispies box.