Organising all their shit, and other things kids can do on Minecraft but apparently not in real life

YOUR child’s room is a shit tip, but their Minecraft inventory is meticulously organised into elements, ores and enchanted bullshit. And they can do this:

In your house every door to the outside world swings freely to and fro, taunting you. In your eight-year-old’s Minecraft house every door is fastidiously checked for fear of zombies and spiders getting in, even though the size of your upcoming heating bill is far more terrifying.

Your child’s bedroom is a swamp of unwashed underwear, discarded toys and dirty plates, but on Minecraft they’re Marie f**king Kondo. They can’t find their homework but put them in the virtual world and they can assemble the ingredients for a Nether portal in seconds.

Kids love to play with pets until they need help with their actual basic functions like shitting or eating. Then it’s your job. Online, however, they’ll nurture every animal under the sun. Herobrine the hamster would be pissed off to see the attention those pixelated f**kers get.

Even straight bribery doesn’t get a child anywhere near a dull menial task that, worst of all, is done outside. But in a land of blocks their lawns are neat and endless while your own garden remains a raggedy shitheap used as a toilet by the neighbourhood cats.

Children act like removing cereal from a cupboard is impossibly arduous and stare into fridges with bewildered incomprehension. The thought of making toast leaves them in a cold sweat. But they’ll call you into the room to see the unreal pumpkin pie they’ve carefully crafted in a world where it doesn’t f**king matter. 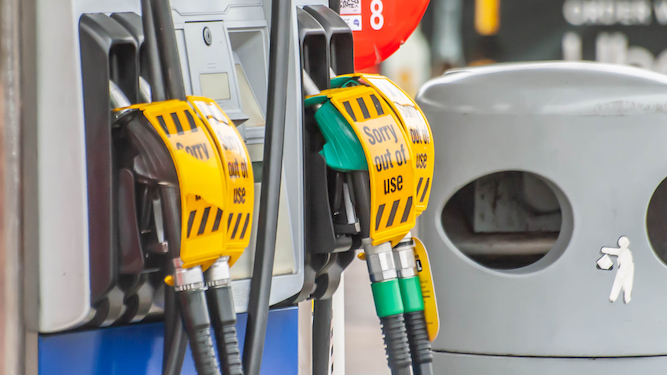 THE fuel crisis is now only affecting motorists in London and south-east England or as the rest of Britain terms them ‘twats’, retailers have confirmed.

With petrol stations in Scotland, Wales, the North and even the Midlands now fully stocked the only people left struggling for fuel are exactly the kind of arseholes who chase tankers down motorways and queue to top up their tanks who caused all this.

Nathan Muir of Mansfield said: “Panic over, everyone. It’s just the dickheads again.

“Of course it’ll still be all over the news because the media’s concentrated in exactly the areas where all the twats and all the fuel shortages are. Not by coincidence.

“But for the rest of the country, who largely aren’t selfish, grasping bastards who set the alarm for 5am so they could beat all their like-minded neighbours to the petrol station, this is all over and we can watch them battle it out for unleaded with our usual pity and loathing.

“Northern Ireland, of course, never had shortages because of the protocol that means it’s still in the EU. I believe the Tory twats of south-east England are planning to do something about that this very week.”

Julian Cook of Hythe said: “If only I and my fellow petty, spiteful neighbours could restrain ourselves this could all be over. But we’re such wankers it’s impossible.”