AN owner of last year’s iPhone is already feeling shame, humiliation and actual physical pain every time he attempts to use it.

Account manager Tom Booker, who was proud of his iPhone until today, is now unable to remove it from his pocket without a spike of agony behind his eyes.

He said: “I used to hold it in my hand, but today I’ve had to put it on the desk because touching its repulsive surface makes my skin crawl.

“And it’s so slow. I could draw chalk pictures on a slate faster than Instagram updates on this antiquated Victorian rotary-dial telephonic device.

“Also, and I don’t remember this from yesterday, the black void of the headphone socket ceaselessly whispers that it wants to devour my spirit, which makes it hard to concentrate on work.

“Aaaah! The home button, it burns! Quick! Throw it in water!” 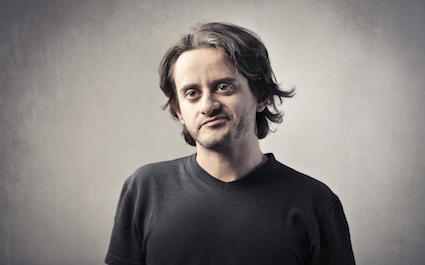 A DEADBEAT uncle mistakenly believes he is a cool uncle, it has emerged.

Unemployed musician Wayne Hayes likes to think of himself as his nephews’ ‘cool, reckless, pot-smoking uncle’ despite them considering him their ‘unemployed, desperate, stale ale-smelling uncle’.

Hayes said: “I know the youngsters see me as this anarchic fun guy. After all, their dad’s a bloody miserable office drone bastard and he doesn’t wear biker boots or let them light fireworks like I do.”

“He’s fun for the first five minutes but then he tires himself out and he ends up falling asleep on the couch smelling like our kitchen does the day after Boxing Day.

“He doesn’t buy us fuck all either, which, being a kid, is all I really care about.”

Hayes’s other nephew James, seven, said: “Uncle Tom-Don’t-Lend-Him-Money is often asleep on the couch when Peppa Pig is on.

“We went to his house once and his bed is a sofa that folds out. I feel sad for him.”