SCIENTISTS will never be able to explain why all beards go slightly ginger when they reach a certain length, it has been confirmed.

Professor Henry Brubaker said: “We were hoping that years of extensive research into the strawberry blonde beard enigma would provide us with a simple explanation, like maybe that humans actually originated in Scotland rather than Africa.

“But no one will ever fully understand the gradual gingerfication of stubble. It’s just one of those things we have to file under ‘unexplainable’, like poltergeists or why people buy new cars when they depreciate so quickly.”

Black-haired beard wearer Tom Logan said: “I’ve always been a believer in rationality and science. Now though I am considering turning to religion in the hope that an omniscient God can explain why I look like Vincent van Gogh from the nose down.”

Terminators to be released into Scottish highlands 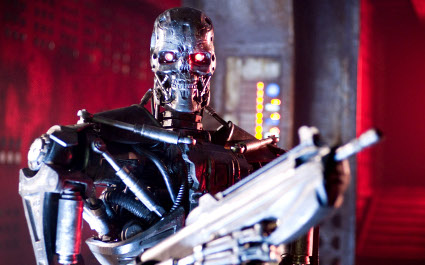 CONSERVATIONISTS have defended controversial plans to release 300 terminators into the wilds of Scotland.

The relentless cyborgs are expected to thrive in the barren landscape despite the absence of clothing and motorcycles. They will kill anyone they encounter.

Wildlife expert Stephen Malley said: “We were already going to repopulate the forests with lynxes, and maybe some wolves. So we thought fuck it, let’s throw in some terminators.”

But Thurso resident Wayne Hayes said: “I don’t know why they feel the need to tamper with nature this way, it’s like in 1998 when they introduced a pod of Godzillas just off the coast and all those ships went missing.”

The Scottish National Trust will assess the impact on the ecosystem of 300 muscular Austrian-sounding killing machines will have, and have mooted the idea of hiring a Predator to keep their numbers down.

Stephen Malley said: “The sight of a fully grown Cyberdinian, which is the less emotive term for terminators, running free across the heather bellowing its distinctive call of ‘Fuck you, asshole’ is quite breathtaking.”