RESEARCHERS have found the fossilised remains of a Southern caveman who lived in a fancy cave eating dinosaur sushi.

Scientists digging near Surrey found expensive bear-bone furniture and other flashy prehistoric goods that suggest Homo Ponceus was affluent but useless at hunting.

Professor Henry Brubaker of the Institute for Studies said: “Even four billion years ago, a cave in the South of England cost a hell of a lot more than a cave in the North, and Southern cavemen’s lifestyles reflected this.

“A bed in this Southern caveman’s cave would have set you back a fortune in shiny pebbles and bear pelts.

“It’s hard to know exactly how he could afford it, probably he ran an annoying firm that made drinks out of berries called something like ‘CaveHugs’.

“While having Homo Ponceus was having dinner parties with his dickhead pre-Tory mates, Northern cavemen, who all looked identical to Sean Bean, were daubing mud onto their gaping wounds and battling sabre toothed tigers.” 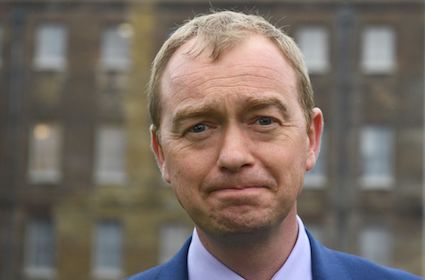 BRITAIN has narrowly escaped becoming a Christian dictatorship under the iron hand of Tim Farron.

The Liberal Democrat leader, who resigned yesterday to take up a new career teaching schoolchildren that God is cool, planned to make the UK a religious autocracy where dissent was not tolerated.

Nathan Muir of Hitchin said: “We really dodged a bullet there.

“A Christian loony following some lunatic holy vision about what’s best for Britain, who views any disagreement as heresy, is exactly what we don’t need right now.

“Can you imagine? Some mission-from-God nutter at the helm, refusing to accept reality or have any contact with the unclean, propped up by fanatics who want to reintroduce Papist-burnings as public entertainment?

“And now that can never happen.”

Farron said: “Jesus is the way and the life, but I think it might be easier to believe that in a career where I’m not constantly being beaten in the polls by demons.”