ROCKING a phone with a cobweb-smashed touchscreen is officially cool, according to experts.

New analysis has confirmed that the fly kids wrecking shit with battle-damaged iPhones are officially hot, and undamaged phones are for fakes and haters.

Professor Henry Brubaker from the Institute of Studies said: “We set out, after a big night, to examine the question of who doesn’t drop their phone when they’re a bit fucked-up.

“Our initial hypothesis of ‘boring bastards’ was confirmed when both Dr Finch-Hatton and lab tech Wayne Hayes were observed using phones with intact screens.

“You probably don’t know them. But they’re twats.”

Fashion experts involved in the study likened splintered screens to distressed denim, while abstract artists rated the aesthetic power of a kaleidoscopic peacock’s tail of colour over some fat Facebook baby.

Brubaker added: “Which perfectly explains the phenomenal popularity of iPhones. They shatter at absolutely nothing.” 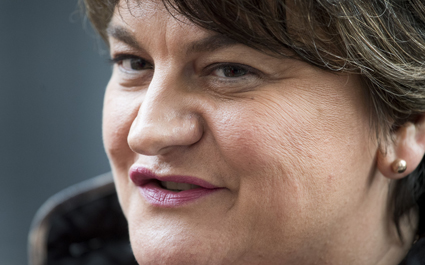 DUP leader Arlene Foster has told the government they will absolutely have to have a post-Brexit hard border after that.

Ireland’s decision to repeal the eighth amendment has left the DUP with no choice but to build a wall 88ft high to stop pregnant young women leaving Northern Ireland.

She said: “We’ll need sea defences too. To stop them kayaking round.

“Northern Ireland is British, not Irish, and our girls must be protected from the benighted ignorance of these religious cultists.

“I would like, if we could, for the wall to be visible from space, so God can see it. It’ll cost £88 billion.”